This East Village resident discusses getting an antibody test 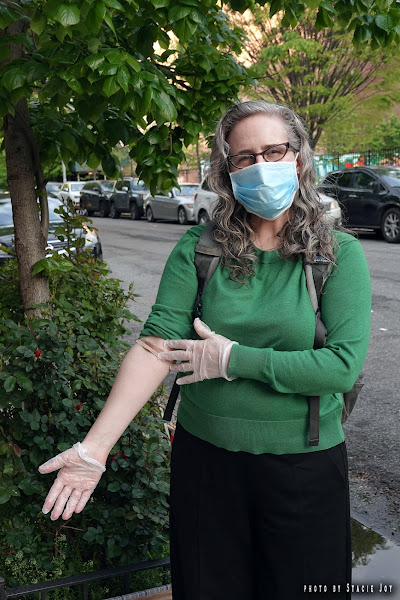 It’s just after the 7 p.m. Clap Because We Care for essential workers when I am able to meet with East Village resident Alex Cobus, NYU adjunct faculty and administrator (associate director of career services), to talk about her experience getting tested for the COVID-19 antibodies.

Walk us through the process of getting the antibody test. How did you schedule it? How were you selected for testing? Where did you go?

Before I could schedule the appointment, they asked a brief series of questions. Each question was about if I had experienced a COVID-19 symptom in recent history — fever above 102 degrees, aches and chills, etc.

I answered no to all, except the final screening question, which was if I had been exposed to someone who tested positive for COVID-19. A coworker of mine at NYU Wagner had tested positive shortly after we started working remotely, and we had been in contact, so I answered yes. I suspect, but don’t know that my positive answer to this last screening question qualified me for the exam.

My primary physician is in Midtown, so I decided to take a Lyft just to ensure that I got there safely and on time. I haven’t gone anywhere, except the occasional walk for my health, so it was a bit strange to go so far and see other neighborhoods. The route along Second Avenue was pretty quiet despite the great weather, so I decided that I would walk home after the exam.

What does the antibody testing entail? What was the process like from beginning to end?

Upon arrival, the front desk was staffed with three people, when there are normally five or six. They all wore proper masks and gloves and checked me in right away. They took my temperature right there with an ear probe. Then I sat in the waiting area. There were a handful of other patients waiting and all wearing masks themselves, and it appeared they too were there for the antibody test.

I don’t recall any explicit social-distancing guidance in the waiting room, but we all kept at least six feet apart around the room, and they clearly didn’t schedule many people to come in at once. There were four of us at most in a room that could hold about 20.

Then, just like any other visit, I was called back to an examination room where they explained the first part of the exam, which was a series of blood pressure tests taken on my arm, just like I usually have. But they also took a reading at both ankles, also with a cuff, and they attached electrodes to the soles of my feet.

Then they took my blood pressure in all areas in three different positions: lying down on the examination table, sitting up on the table, and then standing for which they removed the electrodes on the soles of my feet.

And for some of the blood pressure readings, they had me perform different breathing tests. I was asked to inhale and exhale deeply several times and these were timed. I had never done these breathing exams before, other than when the doctor asks one to breathe while listening to your lungs with a stethoscope.

To be honest, I started to wonder at this point if they had made a mistake and were giving me the wrong exam. I confirmed this was part of the antibody test and we continued.

Then I waited for the doctor to arrive when he explained next steps and asked if I had any questions.

Will you need to repeat this testing again if you are negative? When will you get your test results?

I will get the results via the LabFinder portal. The doctor explained to me that there is an approximately 10 percent chance of a false-positive or false-negative. So, regardless of the result, it's not 100 percent. But since I don’t think I contracted COVID-19, that will influence any decision to retake at some point.

Were you also tested for COVID-19? Did you think you may have had the virus or been in contact with someone who was ill?

They didn’t test me for the virus, and I don’t think I have had it. Like many others, I did have a terrible cold right before Christmas and that went through our entire office. While it was a terrible cold/mild flu, I didn’t experience the typical COVID-19 symptoms.

But since I was in contact with someone who did test positive, it’s possible I was exposed. We work in the same office and she tested positive mere days after we were all instructed to start working from home, so she potentially exposed many of us before becoming symptomatic.

What’s the experience been like? What prompted you to get the testing?

Now that it’s done, the experience was fine, save for the gruff lab technicians who didn’t bandage me well, and my bandage leaked — highly unusual and the least of my concerns.

I decided to get it for a number of reasons. First, I was simply curious. I had potentially been exposed by a positive-testing coworker, and potentially from just living in New York, one of the epicenters of the virus. If I did have the antibodies and could support research and/or a vaccine, then I have an obligation.

Moreover, I have the privilege of health insurance and access to the test. Those were powerful reasons to get the test. And I know the tests aren’t 100 percent conclusive, but I assume I’ll take it again at some point, and together it may be conclusive down the road. Finally, after feeling a bit helpless for so long, it felt good to do something!

Since this interview, Alex received the results, and they were negative. This is some language that accompanied the results that may provide some helpful context:

Negative results do not rule out SARS-COV-2 infection, particularly in those who have been in contact with the virus. Follow-up testing with a molecular diagnostic should be considered to rule out infection in these individuals. Results from antibody testing should not be used as the sole basis to diagnose or exclude SARS-COV-2 infection or to inform infection status. Positive results may be due to past or present infection with non-SARS-COV-2 coronavirus strains such as coronavirus hku1, nl63, oc43, or 229e.

I asked Alex how she felt about the results.

I feel unsurprised, and maybe a little disappointed, but not really.

I tried imagining my response for each outcome and realized that since there was a chance the results were incorrect, that it would require a follow-up exam to confirm.

If I had ever experienced symptoms, AND tested positive, then it would be more likely that I had had it. But I still have some indication that I most likely haven't contracted it before, and I hope that my exam contributes to a larger body of knowledge about the virus in NYC. I'll discuss with my doctor about any next steps.

I just went to the CityMD on 14th - very quick. Register on the iPad, they take your blood pressure and temp, then someone comes in and draws blood. Whole thing takes probably 20 minutes, and got the results back in two days. Everyone was properly protected and very nice!

Jen, was the office very crowded? I'm wondering if going to CityMD will potentially expose me to the virus, a hard decision.

Went to Quest on LI. iPad check in. 5 people in waiting room. All distanced. Was seen within 10 mins. No tests at all other than drawing blood. In and out.

I went to CityMD on 14th and 3rd ave at 8am in the end of April. There was a long line in the morning. It was crowded too in the waiting room but everyone was wearing masks. One of the people that were waiting couldn't stop coughing but they didn't try to isolate her from the rest of us. It was disappointing to know how they handled the situation. I know she might not have the virus, but that made us so uncomfortable to wait inside. I am glad that they improved the situation or maybe fewer people were getting the test.

Did the test providers clarify the veracity of the results? You hear about tests being 90% accurate which somehow allows for false positives up to 70% of the time (I'm not a medical expert, I read it in the NYT).

It's better than nothing but I hope the emergence of the Roche test as approved by US, EU etc as being reliable will be the one that these facilities are using.

Isn't CityMD the company that just had to clarify to 15,000 people that the way they reported test results to them was unclear?

I received an antibody test from Lab Corp. I filled out a very simple questionnaire online and made an appointment. I was able to remotely check in (from outside) on the phone and was sent a message when they were ready for me. Without waiting in the reception I was sent immediately to a room where the tech drew blood. The whole process took about 5 minutes. I had been very sick with a "flu" with all Covid symptoms in January. Unfortunately the test came back negative which leaves me wondering if it was a false negative. A coworker had died along with others testing positive in March.

They did say that people with antibodies were immune, and then had to go back and say they actually possessed some level of immunity but weren't necessarily immune.

Had the test at CityMD in Midtown East - signed in on iPad, waited maybe 10 mins (waiting room had multiple chairs blocked off to ensure distancing), got normal blood pressure/temp check - but other than that, just the blood test. I was 99% sure I had had it back in mid-March (had fever, aches, nausea, loss of taste and smell), but wasn’t able to get the test at that time since my case didn’t involve difficulty with breathing. I tested positive for antibodies, so that helped put my mind at ease/confirm what I had suspected.

The test results were not unclear. They just had to retract the premise of having antibodies would be a guarantee against a second time infection.

Can the author say which test she was given?

I’ve had it, can I go get a drink now somewhere please.

Mamamama- There were maybe 6 people there, sitting spaced out, and they were limiting people coming in - all very safe. I've had other friends go as well and they also found no real wait (outside of the ones who went on the first couple of days).