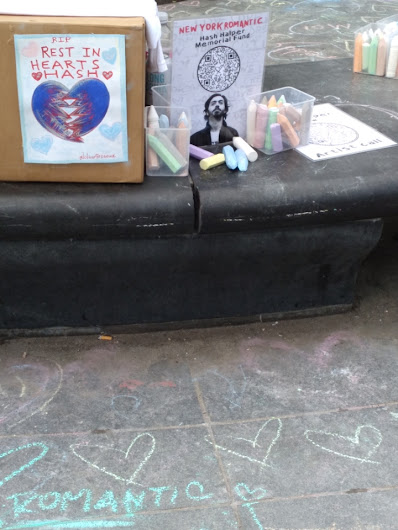 People turned out today to pay their respects to Hash Halper at the New York Romantic Memorial Chalk Out in Washington Square Park.
Halper, the artist known as New York Romantic, drew chalk hearts on the sidewalks around the East Village and other parts of the city these past few years. He had said he felt New York was losing its romance.
And during the day, people had a chance to thank the late artist for all his efforts (photos here by Lola Sáenz)... 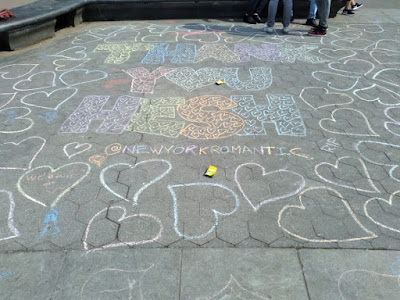 He died on June 11. According to published reports, he took his own life by jumping off the Brooklyn Bridge. He was 41.
If you or someone you know is at risk of suicide, please call the National Suicide Prevention Lifeline at 800-273-8255, text TALK to 741741 or visit SpeakingOfSuicide.com/resources.
Posted by Grieve at 5:30 PM

RIP Hash. Thank you for bringing a little bit of joy to my life when I saw your hearts on the street.

I never paid attention to the hearts before the pandemic, but I found them cheering during. Stay with us, friends; we need all of you.

Hash..RIP
I enjoyed your hearts. They cheered me up.

thank u for all the street hearts to a city star, RIP<3