One of Amelia and Christo's red-tailed hawk offspring has died 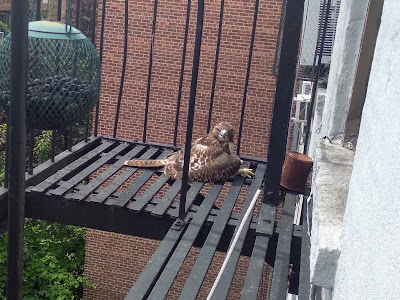 One of Amelia and Christo's red-tailed hawk fledglings died last night.
On Friday afternoon, the young hawk was spotted in a dazed state on a fire escape behind a building on Seventh Street. (Thank you to Lauren of 7th Street for sharing these photos.)
According to residents, the hawk "flapped clumsily out of a tree onto our fire escape. Clearly not well, damaged wing or leg?" 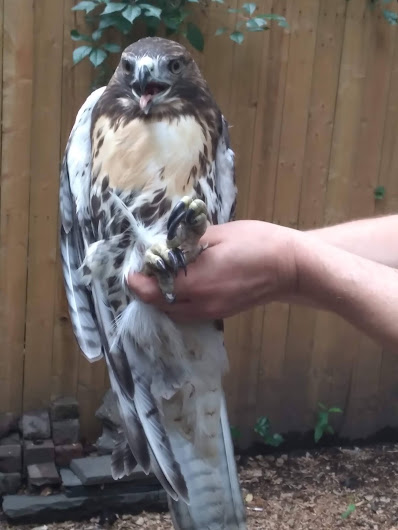 Rob Mastrianni of the NYC Urban Park Rangers transported the chick to the Wild Bird Fund on the Upper West Side for observation. There was blood in the hawk's mouth. However, as Goggla noted in her post today, an official cause of death has not been determined. The young hawk was said to have a spinal injury.
Amelia and Christo, the resident red-tailed hawks of Tompkins Square Park, had three chicks this spring. One died from unknown causes in May.
The surviving two fledglings had been quite active in recent weeks, learning to fly and hunt.
And this is not the first time that the resident red-tailed hawks have suffered the loss of their fledglings. In 2018 and 2019, at least one of the chicks died from rodenticide poisoning.
Signing off with part of Goggla's post:

[W]e've noticed several dead rats in Tompkins Square Park and in the surrounding neighborhood over the last couple of weeks. This is NOT normal and anyone finding a dead rat should report it to 311. If one is found within the park, please notify a park employee so they can dispose of it. We have concerns that with all the trash in and around the park the last several weeks, people could be using rodenticide. We currently have an outstanding inquiry with the Parks Department to confirm whether or not they are still employing nontoxic dry ice for rat control.

I recently (Friday? Sat?) saw park workers with a cooler, employing dry ice in the grassy area between the basketball court and the sidewalk.

I was so worried about the young hawks and other animals in the park last night with all the fireworks being set off in the park and around the park. I wouldn’t be surprised if this bird and others were flying wildly trying to escape the loud booms. I can’t believe people were allowed to set off fireworks in the park all night. That one corner where the skateboarders hang during the day is littered with remnants from last night’s shitfest.

Yes… in this case, this had nothing to do with fireworks …the residents found the hawk on Friday afternoon…

I’ve wondered about rodenticide as I’ve seen a number of squished rats in the streets — usually they move quickly enough to not get run over.

All week leading up to the 4th there were idiots blasting fireworks and startling the birds in the neighborhood. They would suddenly fly out of the trees in groups and fly through the park like the world was about to end. Between that and the rodenticide it isn't good for the hawks. There have been so many dead rats on the blocks around the parks recently.

I’m so devastated to hear this. 💔

So sad. I am so sorry, little one, that you were not able to grow and live a good life.