44 Union Square to be filled with pet sounds 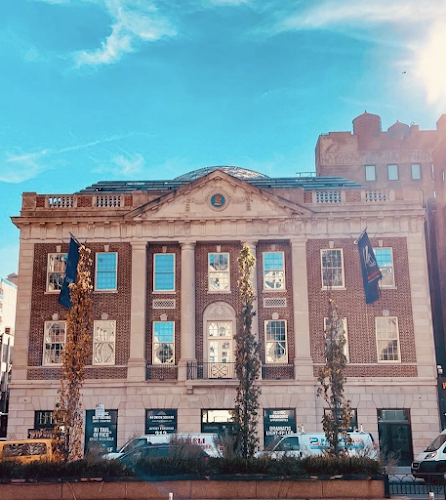 After a loooong renovation that included an addition of a glass dome, 44 Union Square (aka 100 E. 17th St. and the Tammany Hall Building) has a retail tenant. (Thanks to @gramercy_local for the above photo and initial tip!)
Per published reports (Commercial Observer and The Real Deal), Petco has signed a lease for a 3-story space, taking 30,000 of the 73,000-square-foot landmarked building. The animal and pet supply chain will be relocating from 860 Broadway on the other side of Union Square.
The previous retail tenants, a magazine shop and Frank's Wines & Liquors, closed in 2016... 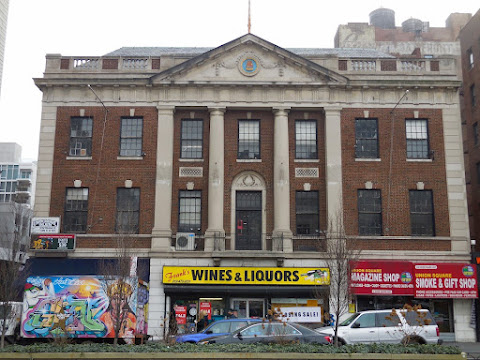 The 17th Street side housed two cultural institutions, the New York Film Academy and the Union Square Theater.
As Jeremiah Moss wrote in 2016 about the building's upcoming renovation: "What sort of businesses do you think will replace these small businesses and cultural institutions? Well, almost every single thing around Union Square Park is a national shopping mall chain. ... Those that aren't, like Blue Water Grill, tend to be upscale."
Now we know.
And address history, per Wikipedia: "The neo-Georgian structure was erected in 1928–1929 and designed by architects Thompson, Holmes & Converse and Charles B. Meyers for the Tammany Society political organization."
2016 pic by J. Moss
Posted by Grieve at 1:00 PM

It's possibly a blessing that we have secured that Petco location. A lot of pet stores have been closing lately, and there's no shortage of pets who need food and supplies. Petco themselves have been liquidating locations, and possibly may have moved out of the neighborhood altogether.

I'm not really going to mourn a liquor store. Among other things, those are profitable businesses (they throw off a lot more cash than mom-and-pop pet stores, for sure) that can relocate if their current site is ending leasing arrangements. It's not like there is a shortage of small-business NYC liquor stores. It's a little more worrying to see theaters and schools evicted, given the shortage of suitable spaces (and incredibly expensive buildouts required).

Just some thoughts about what I would prioritize to actively preserve, rather than wait for building owners to make decisions for us.

Take a look at the glass dome.

Then go to the website for the building, 44unionsq and see what they think the dome looks like. Or what they *intended* it to look like.

Much better this way.

Isn't there already a Petco on the northwest corner of Union Square? Is that one moving to this space? And if so what happens in the old location?