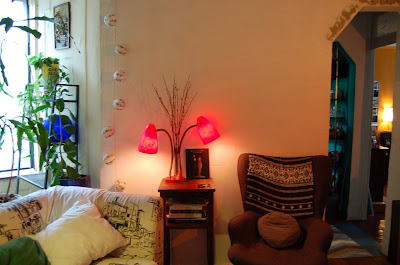 East Village resident Susan Schiffman has been photographing the apartments of rent-stabilized tenants living in the East Village for her Instagram account, I Am a Rent Stabilized Tenant. She shares some photos here for this ongoing EVG feature.
Photos and text by Susan Schiffman
Tenant: Jeanne, since 1986
Why did you move to the East Village?
I am a native New Yorker. My father is from Queens. He is Italian American. My mom is from Brooklyn; she is Irish. We like to call that a mixed marriage. I am one of those classic Italian-Irish mixes from that era of New York.
My dad became a firefighter and they moved when they got married and started to have kids. I was born in Flatbush. They moved to Staten Island like everyone else after the Verrazano Bridge was built. I grew up in Staten Island and I went to NYU. That is how I ended up in the East Village. It was a no-brainer.
I had a friend in college who lived on 1st and 1st. It was 1980, and it was like venturing into the wilds. People told me not to go to the other side of Tompkins Square Park. My first apartment was on 11th between 1st and A.
I had a friend who lived on 2nd and B. When I went to visit her, I would stay over. It felt safer that way. When my daughter was in junior high in the late 90s, her friends’ parents did not allow them to visit. Until the restaurant scene started percolating.
Where did your daughter go to school?
She went to public schools. She began elementary school in the Lower East Side School. It was in the PS188 building. The name was changed to East Village Community School when they moved to 12th Street. It was the first small progressive school in District 1. Neighborhood School became the second. I kind of pulled her out. There was a shooting one day nearby. I moved her to PS19, a more conventional, traditional elementary school.
When I first moved Chloe to PS19, it wasn’t going well. They would say, “we’re going to take a spelling test,” and Chloe had no idea what a spelling test was. The progressive alternative schools in the neighborhood didn’t give tests or grades. Students received report cards, but they were narratives about how they were doing, not letter grades.
I made an appointment with Judith Foster, who had been Chloe’s kindergarten teacher at the Lower East Side School, for some support and guidance. She was now the principal at The Neighborhood School. Judith is an incredible educator, resource and support for students and parents.
For middle school, Chloe went to the Lab School in Chelsea. It was a good sequence because she learned how to navigate the city. She used to go to swimming lessons on 23rd Street. She could walk from PS19 as a 5th grader through Stuyvesant Town with a friend.
By the time she went to junior high, she would take the bus. She could take the subway in the daytime. She went to Bronx Science for high school. The kids were from every neighborhood in New York City. They had the run of the city. They lived in Chinatown, Jackson Heights, Roosevelt Island. I feel good about that.
The city is a great place to bring up kids. It’s nice to have a couple of good friends still in the East Village because so many people are gone. I met Raquel through downtown theater people. I met her when she had the New York Theater Asylum, and I remember bartending there. Chloe must have been a baby. We’ve known each other for over 30 years. She’s a unique character in the East Village. 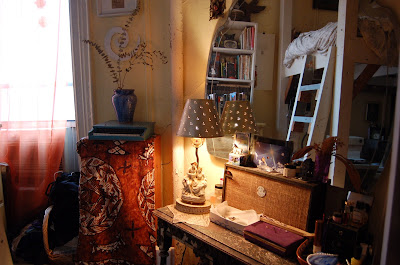 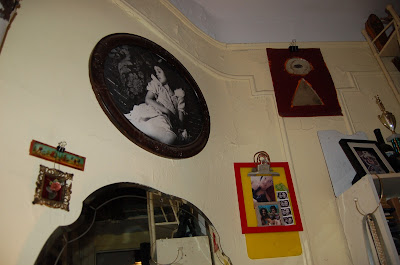 How did you find your apartment?
I was living on 11th Street and 1st Avenue in a tiny little two-room apartment in the back of a tailor shop. There was one room, and it didn’t have windows. I should have had the storefront, but what did I know? I was still in college.
I got pregnant with my boyfriend, who was like the coolest dude. He had a recording studio in a basement. Remember when everyone had music in the basement in the 80s? We had Chloe there. 11th Street between 1st Avenue and Avenue A. I still remember going into labor. I said, “go get the cab.” We had a $5 bill taped to the dresser for the cab to take us uptown to the midwives at St. Luke’s Roosevelt. All the way up to Lincoln Center — $5!
My boyfriend had to go up to 2nd Avenue to get a cab. Cabs were not coming to Avenue A. There were three of us now living in this tiny little place. We realized we had to get another place. We didn’t think we could afford anything. I knew the people that were living here, in my current apartment. They were friends who I worked with in the experimental theater scene.
When one of my friends decided to go back to Germany, he offered us the apartment. He knew we had a baby and needed more space. It was an act of generosity. This was like a palace with 2 bedrooms, an eat-in kitchen. It’s not that many square feet, but it feels very spacious. My daughter could have her own room. I thought I had died and gone to heaven. What we were paying wasn’t very much, but it seemed high at the time. And it has gone up. But it is still affordable. It’s how I can be an artist. It was a sublet when they left.
One of them lives in the city part-time, and the other stayed in Germany. Eventually, by the book, with the legal percentage increase in rent, the lease would be in my name. We were young and in flux. I was in flux, but I had a baby, so I couldn’t be that much in flux.
And that is why I still have the apartment. People say, “you are so lucky.” It is not about luck. We lived through some hard times over here. There were the frequent insurance fires, abandoned buildings, the dope and crack years, the gentrification wars, and of course, the devastation of AIDS.
What do you love about your apartment?
So many things. But I think the most important thing is the light. And people might laugh because they think there is no light in NYC. But because of the way the apartment is situated, the light moves around all day long. So different rooms become lit. I move around with the light. My daughter tried living in a bunch of other places. And said, “I am spoiled for life. I didn’t realize it, but I need an apartment that actually has sunlight.” I was worried when they built the building next door. That it would cut off my light.
I used to lie in bed and see the Empire State Building. That does not happen anymore. But I can still see the moon. This is East. When the moon rises, I can see it. I’m also close to the roof. It’s not a particularly nice roof. It has a giant T-mobile tower and cell phone stuff everywhere, but it’s my porch.
I’ve done a lot of work with astronomy in my artwork. I have shot several films from my East Village roof. It’s important to go out and check-in with the planets and see where the stars are. I can see the bridges. We used to be able to see the World Trade Towers.
When I look at these floorboards, I know that these are the same floorboards walked on from the time this building was built in 1898. The East Village is a really wonderful part of New York City, and it is the only place in the world where I feel relaxed, accepted and at home.
There isn’t one closet in the apartment. It’s not like the Upper West Side. It’s immigrant housing. The wardrobe I have for my clothes was here when I moved in. I think it’s been here since 1920. It’s not fancy. I never changed anything. Why bother? I appreciate that history. I need to live in a place with a lot of history.
We had a downtown, underground culture mixed with the old communities that were here. None of us had any money. There was a huge creative spirit. All of these things mixed together made a very special cocktail. It’s a connection. We have a certain way of understanding history here. We’re on the continuum. 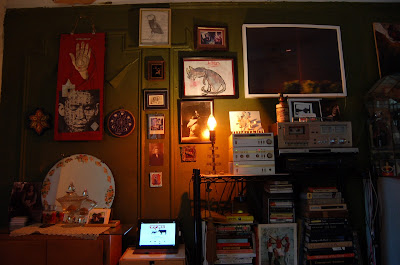 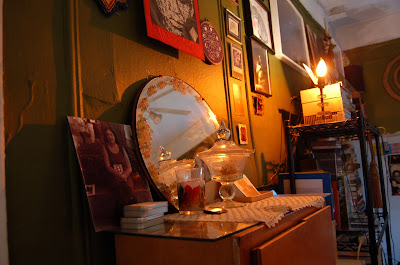 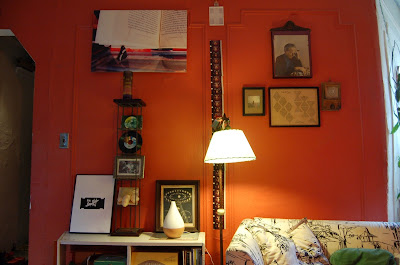 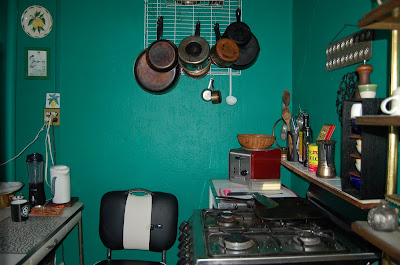 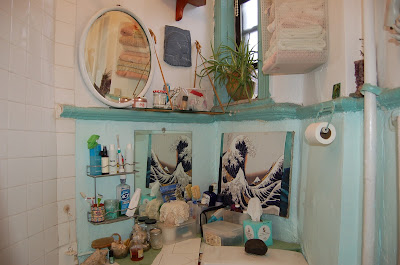 If you’re interested in inviting Susan in to photograph your apartment for an upcoming post, then you may contact her via this email. And read about her in The New Yorker!
Posted by Grieve at 6:00 AM

Thank you so much for sharing your story with us, Jeanne! And thank you for staying in the neighborhood!

As a 40-plus-year EV resident who lives farther east on 11th Street, I am surprised I never met Jeanne, she definitely sounds like someone I would have liked to be friends with.

Yay, Susan, you're back! Beautiful photos :-)

Your apartment does have great light!

This is a great series. The realest people of the city.

yay, i love this feature! jeanne and chloe sound awesome (and the "go away evil" prayer candle and WFMU on the laptop are excellent supporting evidence).

my kids were at the Neighborhood School in the great Judith Foster era too. (they eventually did learn to spell.) (and i personally prefer narrative reports to letter grades!) we agree on what an absolute treasure Judith is! i hope she is enjoying a much-deserved chill retirement.

Ditto all the comments about Judith!!

Above & beyond supreme, thank you for sharing your story!

Happy to see this series return.The colors in your apartment are great, Jeanne!

LOVE THIS series and this one is very sweet. Thanks for this piece!

Thanks so much everyone, and a special thanks to Susan, what a pleasure. Am thrilled to be a part of this great East Village tradition!

Thanks for the kind words - I am enjoying retirement but miss you all. Love to Chloe.

I love this neighborhood. Thank you to Jeanne and all of the other tenants for letting me into their homes, including Glenn & Lola, here. Thank you to EV Grieve and their followers and commenters. Marjorie, haha, thank you for reminding me of the spelling issue debates. And so grateful for the very special education our son experienced during the Judith years at The Neighborhood School.