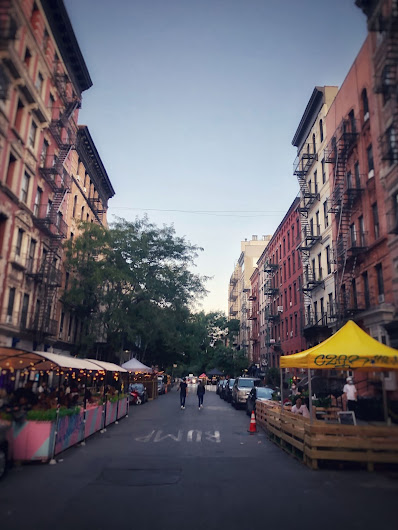 The summer of 2020 on Seventh Street
Today, the proposal to remake outdoor dining in NYC heads to a full City Council vote.
Last Thursday, the Council's Subcommittee on Zoning and Franchises and the Committee on Land Use voted to recommend the approval of a zoning proposal, which is a first step in creating a permanent outdoor dining program.
City Council will be voting on this same resolution today.
All this follows the Council's lone public hearing on the proposal, a contentious 9-hour marathon featuring 250 people testifying for or against the program on Feb. 8.
One takeaway from that, per published reports: Julie Schipper, head of the Department of Transportation's Open Restaurants Program, told City Council that the dining structures erected in the summer of 2020 won't be allowed to remain standing under the new guidelines.
"We don't envision sheds in the permanent program. We are not planning for that," Schipper said. "What would be in the roadway [are] barriers and tents or umbrellas, but not these full houses that you're seeing in the street."
This CityLand post outlines what needs to happen...

To establish a permanent open restaurants program, several legislative and administrative changes would need to occur. First, a zoning text amendment that eliminates certain restrictions on where sidewalk cafes can be located needs to be approved. Last November, the City Planning Commission voted to approve this text amendment, and now the amendment needs the approval of the City Council.
Next, the City Council would need to pass legislation that would repeal the Department of Consumer and Worker Protection’s authority over sidewalk cafes and authorize the Department of Transportation to establish a permanent program.

Once the City Council approves the program, the Department of Transportation and other relevant agencies would need to establish administrative rules about the program, which would also be subject to a public comment process.

But, as The Village Sun reported last Friday, the Land Use Committee "voted to 'modify' the bill ... by removing the DOT as the lead agency."

However, this does not necessarily mean the DOT is out of the picture for good. Basically, moving forward, as part of the process of creating the new law, Velazquez and fellow councilmembers will now be deciding whether D.O.T. should continue to run the program or whether the job should be handed off to another agency.

This Gothamist piece from Feb. 15 has more on the design of future outdoor spaces.
City officials have said they hope to have a permanent program to begin in 2023.

As The Sun pointed out: "Basically, a lot is currently in the works and still unsettled."
Posted by Grieve at 5:30 AM

I know a lot of people reading this blog are are super opposed to the dining sheds, but I hope even they can appreciate that some restaurants really did an excellent job with it and some are even works of art.

Off the top of my head, Olio e Piu, Miss Lily's, The Immigrant, Veselka, and many others all have well designed, decorated, safe, and locked structures that I think were positive for the neighborhood and pretty charming.

Totally agree, 7:44. Lot of great actors that have substantially added to our neighborhood and city. The ones that don't maintain them, blast music, and aren't considerate of their neighbors should be fined and lose the privilege, but we should not punish the many on the account of the few.

Hopefully they also go a step further and make certain streets permanently pedestrian only and we can move towards even fewer cars.

Under this zoning proposal the rats will get to keep their own permanent structures, also known as your apartment building.

If the restaurant in my building gets to continue to use the sidewalk and street in front of the building and the two buildings on either side - then why not any shop or business? Why limit it to restaurants and bars? Why not allow nail salons and tattoo parlors, bodegas and bookstores and Happy Socks and tax preparers set up structures outside of their leased spaces. Logical?

Oh please. Not the rat debate again like the other post from the other week. The first comment posted at 7:44 was spot on. Yes, there are numerous sheds that are beautifully done and that are still properly maintained where a lot of money was put into. Why are some people's knee jerk reaction on EV Grieve to condemn and attack others who support what has been proven to be a reasonably good thing for business in our city? We need more positive insight. Not pointing fingers, assigning blame and yelling at one another. I see both sides of this brewing argument. Some sheds are eyesores and are not taken care of. I don't know how to circumvent around this or how we move forward as a community. Perhaps we should get rid of them at some point soon. But if we lash out at each other on this platform, nothing will change.

Funny how the NIMBYs never agitate to solve trash collection. Grownup cities around the world have long solved this problem with per block closed trash containers, but I guess it is easier to complain and drag others down to their level.

Put it up for a vote. They'll never do it.

Keep it for the Summer, it'll be used. If people are crying because it's taking up parking spots, keep crying.

I had sent Rivera's office a lengthy email expressing my opposition to the sheds before the council hearing took place Last night I got the what I assume is her standard reply to all those in favor and opposed. It's typically non commital and in seems to be walking the line between residents and the hospitality industry. I wish she had the same view and initiative as the council members districts one and three who seem far more in touch with residents concerns.., Sigh!

Thank you for contacting the office of Councilwoman Carlina Rivera to share your concerns regarding outdoor dining. We greatly appreciate your thoughts and input.

In response to the pandemic, Councilwoman Rivera was proud to support the emergency Open Restaurants program, bringing relief to small businesses, restoring jobs, and giving New Yorkers places to gather safely. This program also demonstrated the need for thorough regulation and comprehensive oversight to account for the multiple factors involved in changes to our streetscapes, including – and especially – how those changes impact neighbors.

City Council is currently reviewing legislation to develop a comprehensive, responsible system for restaurants to utilize outdoor space that evaluates both the previous sidewalk café program and current emergency outdoor dining program. As we review this legislation, we are taking feedback from members of the community and will advocate for the new law to include provisions that address these concerns.

We will also continue to work with agencies on enforcement for the duration of the current emergency program. If you believe a restaurant is in violation of current regulations, or there is a dining structure that is abandoned, please file a 311 complaint and forward it to our office so we can ensure a swift response.

Thank you again for sharing your concerns – we will continue to keep District 2 updated through our newsletter and social media channels, and recommend subscribing to get the latest news.

CONFIDENTIALITY NOTICE: This e-mail message is intended only for the person or entity to which it is addressed and may contain CONFIDENTIAL or PRIVILEGED material. Any unauthorized review, use, disclosure or distribution is prohibited. If you are not the intended recipient, please contact the sender by reply e-mail and destroy all copies of the original message. If you are the intended recipient but do not wish to receive communications through this medium, please so advise the sender immediately.

A permanent expansion of outdoor dining and drinking in the East Village is very unfair to the people who live above it.

For every good actor there's dozens of bad and some very bad, ( how do we determine who's who?) the loud outdoors music many of the establishments forced upon their direct neighbors was despicable and wrongly pushed the idea that the east village is a anything goes do whattchalike regardless of how it effects those around you and those who actually live here, from the rooftop Discos (which started up again the other day) to blocked building entrances and roving drunk people hollering and the roving boom boxes tthe once active and lively east village in some areas became a hellsscape for many long term residents those same residents aided in creating the safe energy in the neighborhood only to be told we're old grumps by people who have lived here only when it was safe to do so

News flash for the dumb tax argument: People without cars pay far more taxes than you do. This doesn't entitle you to free storage for your clunker.

Some people need cars. Like to make a living not for luxury reasons. people who like cannot afford to live elsewhere because they are rent stabilized... AND they just so happen to need cars for gig work like musicians, carpenders, handymen, artists, photographers, film makers. No one wants a car for fun, but its pretty closed minded and entitled to think there is zero need for them here. must be nice to live a life like that, but I do not, nor can i afford to pay for garage storage, nor can i afford to move to the burbs... so we balance. i deal with the sheds, i hate them and i think resturaunts dont need them anymore... its merely free real estate and is unfair to other businesses as mentioned above who dont get free square footage.
rats are a thing because street sweepers cannot get through all the spaces equally. that is the problem and its disgusting at night when you see it.

I pay a lot of taxes for your children to go to school So you’ll have to forgive my occasional parking on the street.

@3:40 storage? You mean public parking? What are you saying

Anon 10:18 spot on... it's just bike activists that write like that, nobody normal thinks of cars as something that "others" use, they're a normal and important tool in society for many people for many reasons and obviously need space to pull over and/or park. The activist people are mad annoying because they only see things in a really close-minded way. You can't do everything on a bike, or on the subway.

If we get rid of cars, how will the dysfunctional MTA keep the subway running ? They'd have to raise the fares. You're welcome for keeping your subway fares reasonable.

They need to ban All outdoor music playing.

I don’t own a car, nor do I want to, but I’d daresay a few silent parked cars make for a much better downstairs neighbor than a restaurant shed.