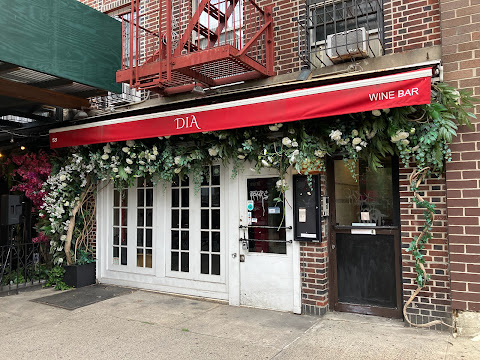 Closing the book here on Dia, which has not been open in recent months at 58 Second Ave. between Third Street and Fourth Street.
The inside of the restaurant that offered Roman-style pizza and coastal Italian seafood is in some disarray (thanks to Steven for this photo) ... 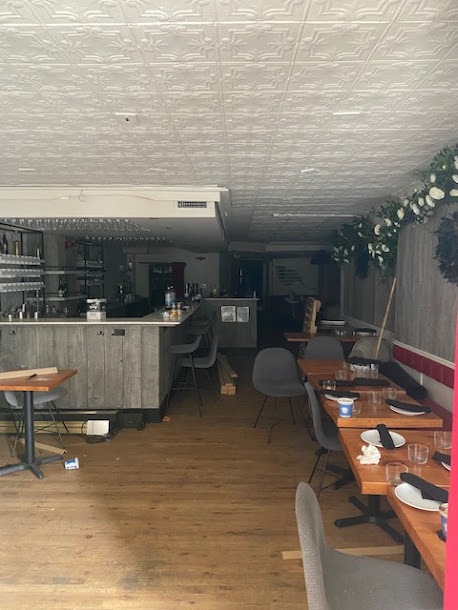 The phone is no longer in service, and Yelp lists the restaurant as closed.
Dia first opened in the fall of 2018... and it was one of several Second Avenue restaurants to shut down coming out of the summer of 2020.
However, at some point last year, new management revived the space until it quietly closed in the early summer.
Meanwhile, as some residents have previously asked, who is responsible for clearing out and/or taking down curbside dining spaces after a restaurant closes? Here's a look at Dia's outdoor structure... 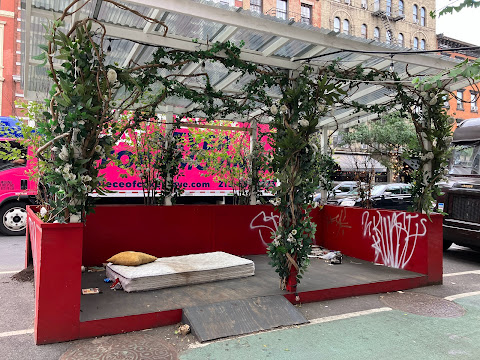 The City dumped the responsibility of these sheds along with the "open / filthy streets" on the clueless DOT. Write, call, email the DOT and let them hear your thoughts. Send photos and videos of the rat culture they are responsible for.

The DOT doesn't give a F about this. There are numerous abandoned sheds such as this throughout the city that look horrible. There was an article posted in NY Magazine a couple of days ago online about whether these types of sheds are sustainable given the amount of filth, vermin and activity it attracts during non business hours. It also touches upon how it has driven customers away due to the unsightly aesthetic and danger of it. Many customers don't wish to dine in them. Various individuals some of whom are homeless are on drugs and or/alcohol that overtake these spaces at night and leave it disheveled the morning after. Not to mention how it is taking up adequate parking and walking space for drivers, pedestrians and residents. Unless there is a significant plan moving forward to carefully align these type of structures, this will lead to an avalanche of issues and misery. I left a well known restaurant in the west village recently as a waiter whose shed constantly had rats appear during dinner service and while we were setting up. As staff we reported to work and were met with syringes, diapers, used condoms, dirty food containers, and other bodily fluids and waste I won't mention. This happened every other day. I am not being hyperbolic either. We had to wear double masks and gloves to address the constant messes. It was so gross. Also, when the trash just sits overnight, rats run to it like it is Christmas morning. And sometimes, the department of sanitation often misses pickup, and wont return for a few days, so it sits there, emanating fumes, in front of the shed, in front of guests, and allowing rats to feast, like it is Christmas dinner. My point is these sheds carried out a purpose for about two years and perhaps it is time to seriously consider dismantling them for everyone's peace of mind and safety as most are eyesores and dangers for our communities.

And now add in monkeypox, which can be transmitted via various surfaces (esp. clothing).

NYC under Adams is sinking fast, IMO, into a bottomless pit of distress. Beyond the shit-show that is these dining shed (esp. the abandoned ones), other major issues include: small businesses closing; unaffordable housing; homeless people/the mentally-ill; thugs of all ages who shoplift with impunity; other thugs mugging and attacking people at random; etc.

And getting "arrested" means NOTHING at this point b/c with bail "reform" it's a revolving door to get the perps right back to where they were: doing illegal activities.

Meanwhile, Adams appears to be worried about (a) what time we put our garbage out, and (b) his pal, the blinged-out ex-con "bishop" in Brooklyn.

It seems the Mayor cannot actually pay attention to more than one issue at a time, and even then he's not really interested in doing his job, IMO - he's just here for the perks and the "nightlife".

My bet is on all of these sheds being dismantled the first time they get a DOH inspection.DOH has been very very lax over the last couple of years due to COVID, but at some point, they have to get back to a regular inspection schedule. None of these sheds will pass Health Dept inspections and will certainly result in massive fines & possibly restaurant closures dues to high violations. Every owner with sheds knows they will not pass inspection - they are just hoping the lax schedule will continue indefinitely.

Nothing in this rant about the mayor represents reality.

The priorities and behavior of the current mayor of NYC are indefensible, and WE are living in the reality you claim does not exist.

Ate here back last fall. Let me tell you, doesn't seem like they wanted to be in business.

I worked at DIA during a dinner shift in the summer of 2019. I was hired as a bartender, yet the head bartender whom was supposed to train me failed to appear nor returned the owners messages of his whereabouts which seemed strange. I ended up working behind the bar the entire night not knowing where anything was or knowing their drink or wine list or policies upon my first time there. I didn't even know what was on the food menu. The management nor FOH staff didn't engage much and seemed annoyed when I asked questions. After seven hours of making cocktails, taking care of customers, cleaning up, and running errands to buy garnishes,, the restaurant closed, and informed me an email would be sent if they were interested in moving forward due to the other candidates that were vetting for the position which was bullshit. I wasn't even offered a lousy meal or a thank you or pay for my services. I left feeling exposed, livid, and hungry. I am not surprised they faced a continuation of troubles. Good riddance.

@12:51AM: That is beyond outrageous! Please be proud of yourself for being a decent person, despite the way they took such mean advantage of you.

I'm actually really surprised that ANY shacks are allowed to be up still, especially closed places not taking responsibility. If they want to have some sort of paid street thing they're talking about in particular licensed circumstances, OK, but all of this pandemic crap should have been mandatory to be taken down long ago. I don't get why it's still going or why DOT is in charge of all of it. It's all so weird.

I walk by this everyday and I hate the sight of it. I don’t know much about DOT or sanitation in nyc but WHY is EV neglected?? There’s trash and obvious things to be picked up and moved around the neighborhood and it doesn’t make it enjoyable to go on walks. There is always trash in that DIA outdoor dining area.

I have to agree with most of the comments (omitting the patently crazy or wing-nutty). Early on I thought the sheds were great... a sign of life after some really dark times. But even then only a few actually offered the ventilation and distance required for safety. Let alone some aesthetic appeal. Now, however, I see them as a nuisance. And as one person here said, not that many customers even want to eat in them now. Twice in the last few weeks I've eaten at a very popular, top-rated restaurant, and NOBODY was in their relatively nice shed either night.