An end to the real estate boom 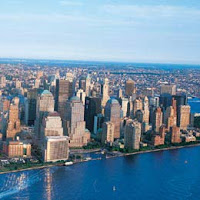 After seven years of nonstop construction, skyrocketing rents and sales prices, and a seemingly endless appetite for luxury housing that transformed gritty and glamorous neighborhoods alike, the credit crisis and the turmoil on Wall Street are bringing New York’s real estate boom to an end.

It is hard to say exactly what the long-term impact will be, but real estate experts, economists and city and state officials say it is likely there will be far fewer new construction projects in the future, as well as tens of thousands of layoffs on Wall Street, fewer construction jobs and a huge loss of tax revenue for both the state and the city.

After imposing double-digit rent increases in recent years, landlords say rents are falling somewhat, which could hurt highly leveraged projects, but also slow gentrification in what real estate brokers like to call “emerging neighborhoods” like Harlem, the Lower East Side and Fort Greene.

“Any continued impediment to the credit markets is awful for the national economy, but it’s more awful for New York,” said Richard Lefrak, patriarch of a fourth-generation real estate family that owns office buildings and apartment houses in New York and New Jersey.

“This is the company town for money,” he said. “If there’s no liquidity in the system, it exacerbates the problems. It’s going to have a serious effect on the local economy and real estate values.”
Posted by Grieve at 7:16 AM

Email ThisBlogThis!Share to TwitterShare to FacebookShare to Pinterest
Labels: gentrification, high rents in New York City, real estate in Manhattan, the beginning of the end, the economy