It has been a long time coming... This vacant lot on Avenue D between Seventh Street and Eighth Street... 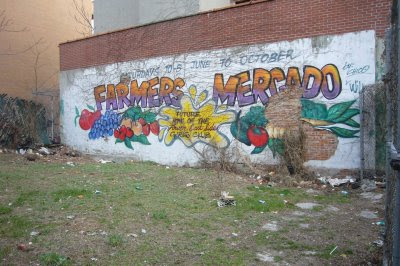 ...will some day be home to a new 12-story Lower Eastside Girls Club.... The Capital Campaign has been ongoing... 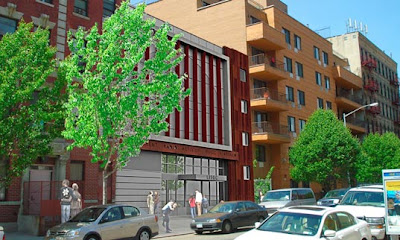 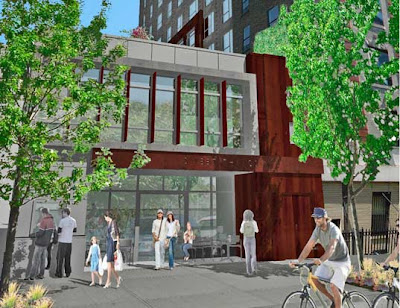 (Before going any further, the people depicted in these renderings really seem out of place... and not at all reflective of the diversity in the neighborhood...and what are those two in the bottom photo on the left doing? The guy on the right looks as if he's peeing against the wall.)

Now, according to an article yesterday at Inhabitat:

Though New York City’s real estate climate is anything but sunny, this year, the Lower East Side Girls Club (in partnership with the Dermot Company, a high-profile local developer) will break ground on a new 30,000–square foot, mixed-use arts and community center on the corner of 7th Street and Avenue D. It will be the first and only Girls Club facility in NYC (when boys and girls clubs nationwide joined in 1986, the Boys Club of New York, operating on the LES, opted out of the merger, leaving the neighborhood’s girls to develop their own organization).

In addition to an expanded version of their Sweet Things Bake Shop, the LESGC’s signature social enterprise, the four-story center will contain open-air space for a farmers’ market, a fair trade bookstore and gift shop, a library for after-school tutoring and book club meetings, a full dome planetarium, a commercial kitchen and culinary training center, a leadership training site for career counseling, an amphitheater, and — if you can believe it—much, much more. The true heart of the project, though, is a science, health, and environmental center that will be available to all community youth.

According to a 2005 article in The Villager:

In 2002, the Economic Development Corporation gave the Girls Club control of six city-owned lots on Avenue D between 7th and 8th Sts. for the site of a new facility...

The Girls Club is not the only beneficiary of the project. About 13,000 square feet of space on the lot will be used for not-for-profit tenants, and 15,000 square feet of studio space will be leased to the Federation of East Village Artists, according to a mayoral press release. Rooftop antennas on the building will provide free high-speed Internet access to residents of two neighboring public housing developments.

As it has been reported, the top eight floors of the building will house 72 apartments. 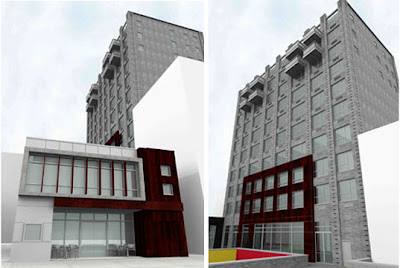 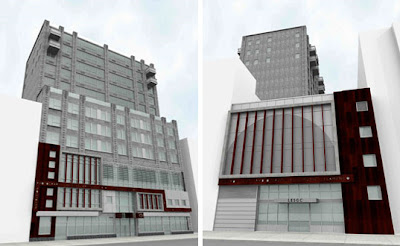 Note: Just around the corner on East Seventh Street is the $10 million penthouse in the Flowerbox.
Posted by Grieve at 7:00 AM

finally, a development that will give back to the neighborhood.

Isn't that Matthew McConahey on the bike? Damn, white people rule no matter the neighborhood. Wouldn't want to scare off those smooth Euro investors!

Something to celebrate...it's been a while.

I'll be surprised if it gets built according to the ambitious design. Wouldn't be shocked if it never got built at all, sadly.

It's going to be built, trust me. If you meet the women who run the Girls Club and see what they've accomplished, you'll agree. www.girlsclub.org

Hi EV Grieve
You are #1 in our bookmarks! We are super fans of your site- so thanks for updating the world on Girls Club doings. We are really, truly, after all this time...breaking ground this year!!!! Just a few comments- that old Villager stuff is ...old. We are no longer an EDC project and no longer affiliated with FEVA. The building is being built through HPD and will only be Girls Club (30,000 sq.ft) and the housing- which is a 50/50 project- 50% market, 50% affordable!
And as for that guy appearing to pee against the wall- unfortunate graphic I agree- but what he is really doing is buying an affordable tamale with rice and beans at our cafe take-out window!!!!
so bike on over in early 2011. And feel free to drop by our 1st Street center and see the floor plans anytime.
(and we'd get to find out who you are-mystery blogger!).
Thanks from gogirl at girlsclub.org

Hi Anon... Thanks for the comment -- and the update... I'll be sure to check out the floor plans (with my disguise on-- ha!)... Look forward to seeing the final product...