As Grub Street noted last week, Nino's at St. Mark's and Avenue A is now serving an artichoke and spinach pizza, perhaps to rival that of the too-crowded-and-expensive-for-my-tastes Artichoke Basille's around the corner on 14th Street.

So I thought I'd try Nino's new slice for a Very Special Easter Holiday Weekend. With the Christmas tree still up, it's easy to be in the holiday spirit at Nino's.

For starters, can you tell the difference between Nino's ($3) and Artichoke ($4) in the two photos below? (Also, I realize that none of this pizza looks very appetizing thanks to my photos and the lighting. Kind of looks like a car just drove over them...) 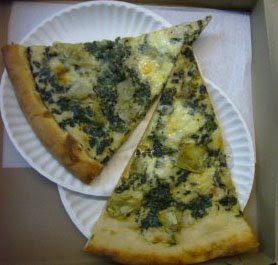 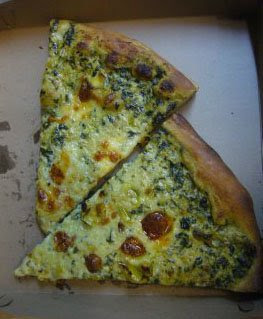 Yeah, the top photo is the work of Nino's. (By the way, I love the fountain drinks machine at Nino's.) 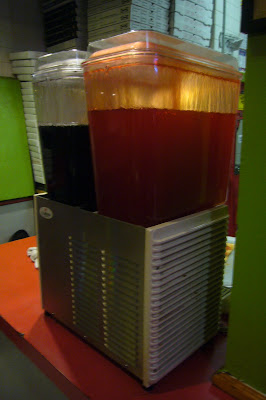 Anyway! As for Nino's new artichoke slice... Well, I'm not much of a foodie/reviewer type, though I do like to use "drizzled" and "artisanal" and "seasonal" in everyday conversation... Oh, so Nino's was quite tasty...less of a gutbuster without so much cheese and the overpowering goopy garlic aftertaste of Artichoke. And it's $1 less...and Nino's has fewer annoying people in line...

Also, I've been to Artichoke twice. Back in August. I was walking by and there wasn't a line, so I wanted to see what the fuss was about ... And more recently, well, I just felt like a slice. Too bad I got stuck in line behind the NYU students who were — seriously — debating where the best ski spots are in Switzerland. (Totes, Zermatt!)

Anyway, I swear the slices at Artichoke were smaller during my second visit...the photos don't quite do them justice, but... And the Artichoke slices weren't as good as the first time. But is it ever? 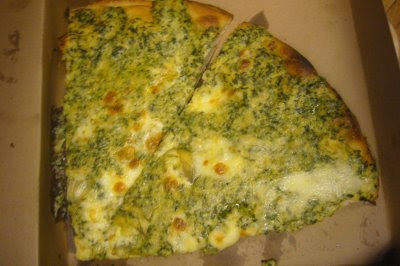 P.S.
The reality is that I miss Five Rose's Pizza. That was the best. By the way, a rumormonger at Eater says the Five Rose's space on First Avenue will be home to another pizza place.
Posted by Grieve at 6:59 AM

Everyone knows Verbier is the best resort in Switzerland.

I sampled a slice at Artichoke. It was so burnt I tossed it after a few bites. And I miss Five Roses as well.

God I miss Five Roses too - my favorite slice in new york and the owner was such a nice lady...

Thanks for the comments...

When Five Rose's closed, Christina, the proprietor and cook, said that she would look to open another location in the EV.

Curious that another pizza place would take her spot. I keep having this horrible idea that it will be something like Papa John's.

No, put your worries to rest. it'll probably be Dominos!
Five Roses was the best...

Well, with a Domino's, this means we can try to get photos of the Noid mascot handing out fliers on First Ave.

Five Roses is definitely missed (the woman there was Polish, interestingly enough and last time I was there she said she also made pierogies occasionally).

I think Artichoke does a really awesome facsimile of Dom Demarco's Sicilian pie, which is all I care about (not into that spinach/artichoke jive).

There is a strategy for avoiding the line if you want a pie: call it in, come 30 minutes later, skip the line...profit!

There is also a strategy for getting an entire pie on the spot if you're at the head of the line, but it costs a premium: Simply order 8 slices. It costs a little bit more, but they'll heat the slices up right there and give you a pie's worth of pizza. If you order a pie, they make it from scratch and that takes time.

I've got a couple stories about dumb-ass NYU students ahead of me in line, too. These two girls directly ahead of me were severely holding up the line trying to figure out what Margherita was, and when I just stepped up and said to the guy "4 squares to go." One of these chicks was all "like, um, hulllo, do you not see me?"

To his credit, the guy behind the counter managed to serve me and assure the girls that he was listening to them as they tried to navigate the complicated ordering process.

Thanks for the comment...good to know about ordering ahead -- I'll pass that info. on. I've been at Mona's when someone suggests getting pizza from there. Of course, no one wants to be the one to stand in line for slices.

Classic NYU-student-in-line story. I swear I know who they are...

why you deretee my positee?..I have no light to post rike the Lound-eyes?..L you Lacist too? I have light to state my beriefs about Ltichole rike the lound-eyes. EV GRIEVE you disgust me.
OBAMA SAY YES I CAN SO I DO!!!