A "showcase" on East Seventh Street 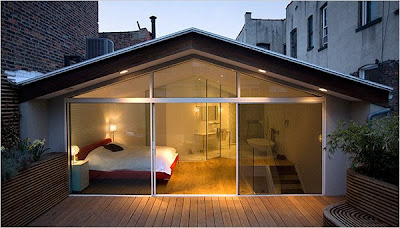 The Beth Hamedrash Hagadol Anshe Ungarn East Seventh Street, described as "a Beaux Arts synagogue built in 1908 for a congregation of Hungarian Jews," was designated a historic landmark last March.

It was split into five residences in the 1980s. Today, the Times features the folks who live in the building's penthouse.

Notes the article, titled "Once Sacred, Now Their Showcase:"

Until pull-down shades were recently installed, neighbors in the tenement walkups and condominiums across East Seventh Street were afforded unobstructed glimpses of the couple’s king-size platform bed, egg-shaped bathtub and clear-glass shower. The blinds might be optional this summer, as the stands of black bamboo that ring the cedar-lined terrace reach full growth, blocking out any Peeping Toms.

[Photo: Michael Falco for The New York Times]
Posted by Grieve at 6:45 AM

exactly. what a perfect, perfect line: "once sacred, now their showcase."

I don't understand how landmark designation is done...But how can something be designated a landmark after it's converted into condos?

i hate to tell them they need a new loofah.