Why have these storefronts been empty for so long?

Today, Jeremiah has a list of places loved — or just well-liked — around town that have been sitting empty with "for rent" signs.

Meanwhile, there are other storefronts in the LES/East Village that have seemingly been empty for years... Look at the recent photo below taken by the EV Grieve Intern of the former Tina Nails on First Avenue near 14th Street. The "Dear customers" sign remains. The place has been closed since September 2007. 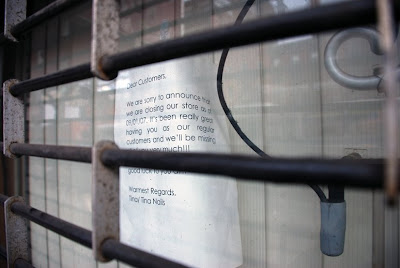 Or how about the Coffee Pot (and, since last fall, Two Boots Restaurant) on Avenue A? Or the long dormant (and jinxed?) restaurant space at 171 Avenue A...?

These storefronts all seem like prime EV/LES locations. What gives? Shit economy? (Though some of these places have been empty since the recession...) Jinxed locations? Stupid landlords?

Here are just a few of the storefronts that remain empty....

There's the former Tonic space on Norfolk, sitting empty next to Blue. 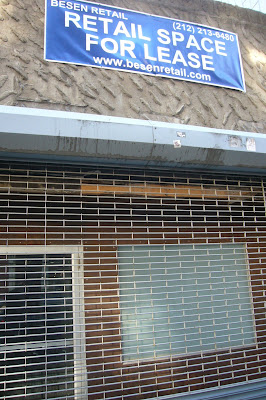 And Kelley & Peng on the Bowery and Second Street. 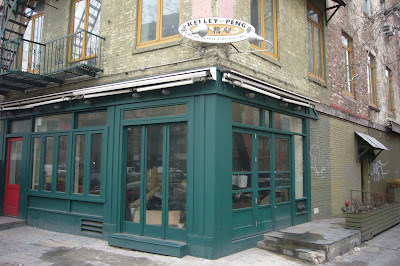 Second Avenue and Third Street. (The one with the CRAZY landlord!) 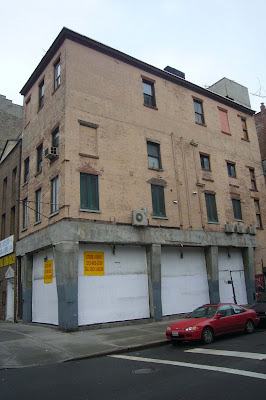 East Sixth Street near Avenue A. 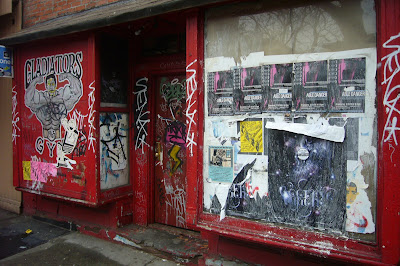 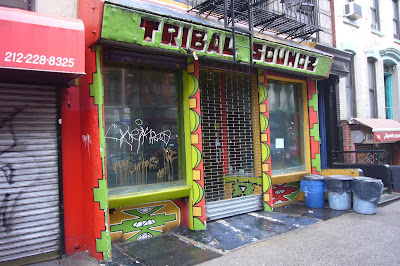 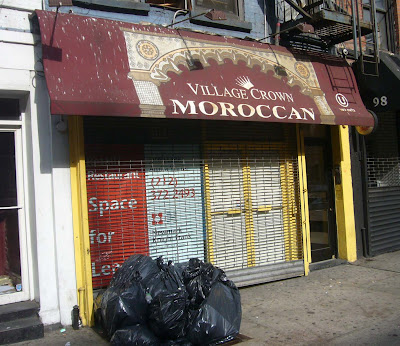 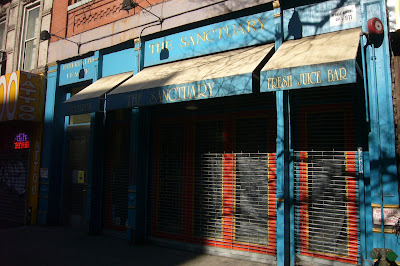 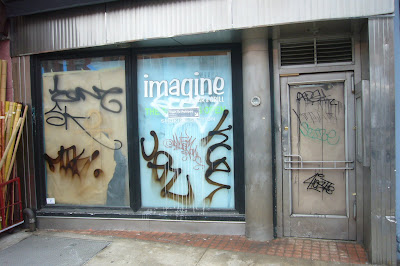 For further reading on EV Grieve:
Cafe de Nova space for rent; Avenue B back up to 22 vacant storefronts
Posted by Grieve at 7:05 AM

This is a great collection of curious spots.

171 Avenue A has an interesting history. The storefront was a recording studio known as 171-A in the early 80's. The Bad Brians recorded their famous debut there:

And the Beastie Boys recorded their first EP there:

It's discussed a bit American Hardcore, which is an awesome documentary:

Good stuff, WB. Thanks for sharing.

Hey, I think the former Imagine restaurant space may be connected to the finger building going up on the 7th st? Perhaps it will serve as entrance/lobby?
The Gladiators gym space. Man, I remember working out there in 1988, very old-school even then. I get a feeling that someone is using it for storage as I have see a lot of material stacked up inside.
But that space at 2nd and 3rd st. is the real mystery. Does anybody remember what was there before?

Hey HG, I bet you're right about the future use of Miracle... The space on 2nd Ave. and 3rd St. was a kitschy store of some sort ... A commenter left this not about it in a previous post:

Raphael Soyer had a studio and residence there. A winery might have been in the basement. A piano repair facility located there. Metro Music located there for decades until the 1970's. An apron store had a short run. A new (not used ) appliance store lasted until around 1988. Rescued Estates a furniture and gift store with an ice cream section did business there until 1999. A local restaurateur was supposed to open a unique and exciting restaurant in 1999. In 2008 they decided it wasn't for them. There is no explanation for their conduct. During the interim, the building was reinforced with concrete and steel to withstand the tremors from ongoing construction. It is solid as a rock. Around 1988 the front door of the building had printed on it "SUPPORT BASTA." Basta was the neighborhood preservation organization founded by local living legend Howard Hemsley (no relation to Harry or Leona) that stopped the construction of a new shelter for crazies and criminals just two blocks from the infamous "Men's Shelter" at 8 East 3rd Street. Basta sued then Mayor Ed Koch & Co for the purpose of turning 8 East 3rd Street into a "shelter that works." Koch agreed and Project Renewal was born. Check it out. Next, Hemsley and his BASTA-rds returned Tomkins Park to the humans in the neighborhood. And finally, BASTA / Hemsley created the DAC (Democratic Action Club.) The DAC launched the candidacy of Antonio Pagan. They and he evicted the 18 year incumbent City Council member who allowed the city to place social service programs in the East Village that overwhelmed the residents and business people. Crazy supported Basta and the community. The store is for rent to the kind of tenant Crazy believes will be creative and exciting. Got guts? Wanna be your own boss? Call Crazy at 212-982-2030.

Hey Grieve, thanx for the follow up!. Btw, got any more hot pix of Lady Gaga? Thats my kind of punk!
hehehehe