The "for rent" signs -- seen below earlier this spring -- have come down at the former Two Boots space on Avenue A...(Two Boots Pizza and the video nook combined into the storefront on Avenue A and Third Street.) 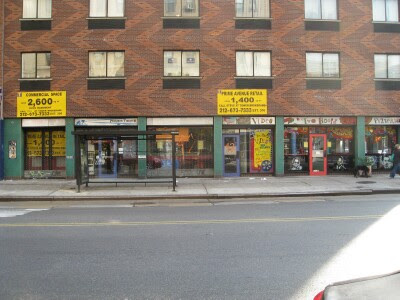 There are now work permits in the window. ("To create new performance theater...") 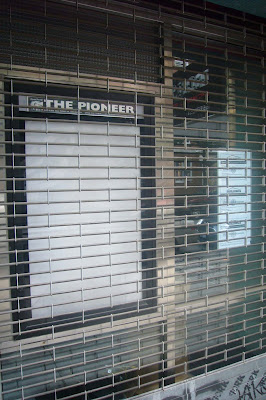 And, peeking inside, you can see the space is being cleared out. 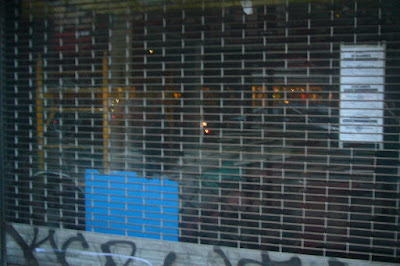 Previously on EV Grieve:
Former Two Boots Video store "in contract" -- largest available retail space on Avenue A
Posted by Grieve at 6:55 AM

wots the deal with ucbt and ppl with cargo shorts? it's like the only plpls that see the shows need to carry cargo all of the time, wot r they trucks or wot? if you wnat to carry cargo get a bag or a truck!

I see so many cargo shorts on these ppl. they must be bringing extra laffs since the ucb is so unfunny and always trying to be on tv and stuff. theyre cargo shorts make the whole ev lame

i know why they all wear cargo shorts, its bc they are all gay and they wish they could be on win ben steins money, i got news 4 u WIN BEN STEINS MONEY WAS CANSELED u stupid gays, lol but srsly, i go there like evry nite and litaraly evryone xcept me has cargo shorts, i always wear khakis, ps the gay stuf is ok if its the girls

i heard that the dude that just got on snl this year the one with the beard but now shaved it was told by loren michales that cargo shorts were not allowed at snl rehearsals and he got super pissed.

Why is everybody hating on cargo shorts? You sound like a bunch of goth kids. WTF does it matter? Seriously! This is new york city, not new york high school - try to get some perspective people!

Seriously though, everybody at the UCB Theatre wears cargo shorts. It's not a joke. In the winter they change to cargo pants. What losers.

OMG! I went thur hopng 2 c Amy Polars but all I saw wuz some duuude named Christopher Guesthard in cargo shorts! EVRY 1 wuz wearin em! I askd the guy in the boxoffiz wearing a detroit cap (and cargo shorts!!!) what tha dealz wz and he pointed on the wall to some ooold duuude with a beard named Glen Close r smthng and he wuz wearing cargo shorts on hiz head!

NEVER will I go back! For someone like meEEE who <3 capris and or tights, UCB is NOT good!

they shuldn't open a new "performince space" at all. they should just open a store that sells regular shorts and nt frickin cargo shorts! then maybe the people that go to the upright theater could go there and buy some! and put some shoes on!

I don't get what you guys are talking about. I own four pairs of cargo shorts. There's nothing wrong with that.

this deb8 is ridiclious. i read a study that said that shorts and comedy r not linkd. U guys prob. need to read moor. I didn't read any thing about sandels so maybe ur rite their.

I used to go to Assssscat at UCB all the time, (and yes, i do wear cargo shorts every day from may til november) but I don't go anymore because everyone that went there were also wearing cargo shorts. WTF!? I really can't have that, so now I hang out at the Toys R Us in Times Square cus it's open til 11 on fris and sats now and I can steal those big planet shaped sweet tarts that are the size of smaller jawbreakers, but they aren't jawbreakers they are better.

Ew. Cargo shorts and sandals make people look like nurses on an Africa battle field. Like the english patient. I hope an elephant attacks the line there because the tusky elephant thinks it;s nurses.

I h8 it when there is all thim carg-hoes around. With their make-up trying to sleep with someone famus. REALITY carg-hoe, none of thim are famus. they will end up being sailors.

i once read an interview with stephen colbert where he said his first comedy central show exit 51 was started becuz all the members wore cargo shorts on a regular basis, so i wouldn't knock on the cargoes too much. colbert is doing alright and those are his roots. plus at ucb i can put some pbrs in my cargo shorts and not have to go back to the bar during the show. it is practical.

I can't sleep 'cause I'm thinking about those shorts. The cargo shorts, that is.

When u r a point gard, sometimes you have 2 pass the ball with your eye on the basket. But would u throw the ball 2 someone waring cargo shorts?!? I dont think so b/c you know they r not sereous about bball the way you are seresous about bball and they would probbaly drop it and then your team would loose. Whats the difference between being a point gard and being a theater acoter? no DIFFFERENCE!!!!! The world needs more Triggs!!!!

I was totes at the gap and Cargo shorts were on sale with a valid receipt from the UCB.

What should one look for in a good pair of cargo shorts?

a good pare of cargos is like the choize of huzbnd 4 a girl or a wife 4 a man--no mattr what u chooz this is a choize for life so get real and noe touch or fun till AFTER YOURE WEDDING. *****PUT A RING ON IT******

UCB comedians need to trust their talent and stop relying on the practicality of their shorts to make thier comedy happen. Maybe you think i'm biased because i am the largest private investor in Tony n Tina's Wedding. If you think that, meet me at Toni n' Tina's wedding tonight, and we can settle this whole thing there. I'll put a dent in your brain.

What do you need big pockits for? Probly ur diaframs. Try sum cutoffs you fag-wads!

dude. I went to a show last week at UBC and I swear a dude had a pair of crago shorts with two cargo pockets on each bigger cargo pocket. GET A CLUE. Who do you think you are, Steve Harwell from Smash Mouth? Eat my shorts...they're not cargos.

Cargo shorts is good for all da glasses dat cant fit on da faces cuz they so nardy.

Apparently it's required that you wear cargo shorts if you take classes there. And at a show I asked a guy why everyone wore cargo shorts. He said that cargo shorts are the only shorts with pockets big enough to fir cargo shorts.

Hoot hoot hoot
i'm about to wait in line for cage match and i'm already hooting!
hoot hoot Hooooooot
ha, i'm not even on the L train yet
HOOT HOOT
OMG! those hoots just came out of nowhere
i better remember to silence my hooting in addition to turning my phone on vibrate and putting inside one of my 7 short pants pockets
HOOOOOOOOOOOOOOOOOOOT

one time on my honymoon i was in in Kansas City and i was in line to visit 1 kansas city place, which is missourris tallest bldg, and their was a family of a family of people wearing cargo shorts and i was like "Where am i, at harold night?" the family didn't get it but LOL my wife and i did

i knew a guy who used to go there. he wore a lot of cargo shorts. what a loser

Oh god I forgot how hilarious this thread was! "Spoken like a pair of cargo shorts." Heh!

I missed my third class at UCB Improv and now am probably kicked out. They will SAY its because I flaked out on the classes..but we ALL know the REAl reason why they banned me. Look, I had a choice. Cargo shorts were $12.99 at Old Navy. Some weird tattered dress from the 1920's that smells like regret was on ebay for $12.98. What the fuck would YOU have done?

Y'all are so high n mitee, aren't you? All becuz some peeple don't wear jorts like you!