East 12th Street now home to "THE ONLY REAL FRAT HOUSE AT NYU!" 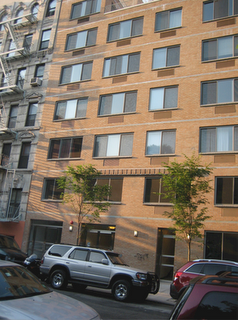 In case you missed this (And I did — found the link via Curbed first), Jill has a post on NYU's Delta Phi House opening up shop at 531 E. 12th St. between Avenue A and Avenue B.

531 East 12th Party Crew (Apt 1E)
Category:
Entertainment & Arts - Nightlife
Description:
There are lots of places to party in New York, but few can match the insanity of 531 East 12th Street. If you are tired of going out to bars, come to an apartment with a massive common room filled with multiple pong and flip cup tables.

Here is an article by the New York Observer written about the parties we throw:

You belong in this group if any of the following apply:

1) Came to NYU and within 2 days, missed having house parties.

3) Forgot your keys, wallet, and name at one of our parties.

4) Hooked up on one of the couches in the common room in the dark, thinking that nobody could see you.

6) Couldn't find your way back to Weinstein, Hayden, or even the front door after partying.

7) Gone to the website and seen a picture of yourself, trashed, on the front page.

8) You fell down the two flights of stairs walking home from our old house (40 Avenue C).

9) You have taken a picture next to our suit of armor in the common room.

10) You and your friends want to come to some of the sickest parties in New York.

Don't miss our welcome week blowouts...there's a reason why the NY Observer called them "legendary".

THE ONLY REAL FRAT HOUSE AT NYU!

On Saturday night it was reported that hundreds of people were streaming in and out of that building and the police came by at least 5 times, to no avail. At around 3am one resident heard something outside her ground floor window and opened it to find a young man pissing in her flowers. She yelled at him and he ran down the street with his dick hanging out.

Now I am officially freaking out. Frat bars are one thing, an actual frat house is beyond anything I can put into words. Let the phone calls of protest begin.

Here's a piece Curbed had on the new building back in March 2007.

So when do we burn it to the ground?

How did this all happen so fast to the upper blocks? I've been on A/13th for 10 years and while the douche level has been steadily growing, it seems like it's simply exploded in the past year or two.

Also, back when I was in college, it was the artsy (albeit rich) students who went to NYU. When did it turn into such a frathole? And if a frathole is what you're looking for why come to NYC for god's sack?!

I have been on the verge of tears all day thinking that I will never get a wink of sleep again from these people, not to mention the dead flowers from the peeing.

The building appears to be mostly empty so that they got this frat to rent 2 floors must have been a big coup. A friend of mine is going to talk to the super about them and I'll keep you updated if I find out anything else.

They say they're at Apt 1E, which according to the MK sales brochure up right now is Community Facility space on the 1st and 2nd floors (and the pics on facebook are of the cellar)- not sure this is the kind of 'community facility' the city had in mind when this was approved. C of O says "THE CELLAR, 1ST AND 2ND FL WILL BE OCCUPIED BY THE HEART MINISTRIES FOR THE PURPOSE OF OFFICES AND RECTORY AS A COMMUNITY FACILITY USE GROUP 3 TO A NON PROFIT INSTITUTION AT ADDRESS."

oh and another facebook page claims next week is their rush week, so uh, be prepared....

The Observer compared these guys to Animal House? Otter, D-day, Bluto, etc., weren't d-bags...They were the cool ones. This guys aren't.

Don't despair, Jill. Just get even. There is plenty of public information on these guys. Look at their public Facebook page. Names. Hometowns. Photos. Call their parents!

I attended a CB meeting earlier this year in which the club at 40 Ave. C (named 40C) appeared. At some point the fraternity mentioned here -- then operating at 40 Avenue C in an apartment -- had caught the attention of NYU with their advertising of parties. This resulted in NYU contacting the NYPD to have a look. Confusion ensued about whether it was the club 40C that was involved with these parties. It was not -- the club had nothing to do with them. By the time of that CB meeting it seemed that things had been cleared up, but not without the operators of 40C going to considerable lengths to disambiguate the situation. They were as polite as one could be given the circumstances, but clearly exasperated, and who wouldn't be? Can you imagine trying to operate a club and be confused with this frat?

Anyway, it's clear NYU cares about this. Registering your concern/complaints with them seems like it will get you somewhere.

Thanks for that info, WB. I understand that 40C is now under new ownership. They're reopening as a 1950s-style Havana club.

The frat is registered as a non-profit organization, so maybe this had something to do with them being able to take that "community" space in the building.

Maybe things have changed since I was in college, but a fraternity or sorority can have their charter taken away if they are found to be in violation of laws and such...

But they're already on double secret probation (uh, sorry -- too easy)

What I don't get is that why NYU has so many frat boys and fraternities, since NYU does not even have a sports team -- that is normally equated with fraternities, e.g. football, basketball, hockey -- that competes in the NCAA level.

I mean, Columbia, Manhattan College, and Fordham have sports teams in the NCAA -- Div I level mind you, which attract the fraternities and the frat boys; and yes they go out and do whatever a frat boy does, but you don't hear them having frathouses and being inconsiderate in residential areas (at least not on a regular basis) in the Bronx, UWS, or UES .

It seems like they're just the NYU frat kids doing this in the EV. It's as if it's their privilege to do this in the EV. Often times, I wonder, if that's somehow communicated, implicitly or explicitly, in the NYU student handbook, or a part of their recruitment method.

Have you noticed they have taken down their Facebook page.

Yes, luckily I took screenshots of it.

Nothing attracts muggers like young out-of-town drunks with plenty of cash in their pockets. Ka-ching!

@Lux Living, I minored in arson at college! Text me!