Back on May 26, the sidewalk shed in front of St. Brigid's on Avenue B at Eighth Street came down... At the time, Edwin Torres, chairman of the Committee to Save St. Brigid's, told me that the scaffolding was interfering with testing that needed to be done inside the church.

This morning, the sidewalk shed is ready to return.... 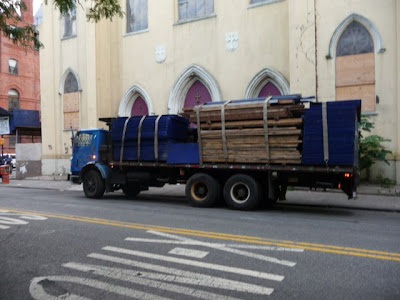 And I never had the chance to truly appreciate the weed tree thing that started growing from the foundation.... 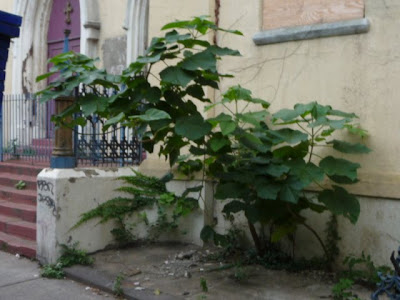 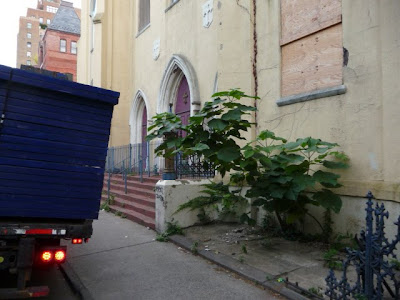 However, as much as I'll miss seeing the front of the church, the return of the sidewalk shed likely signals the beginning of the restoration process. Otherwise, it has been awfully quiet at the church this summer. Earlier in August, I asked Torres for an update. According to Torres: He was told by the site's construction manager that the city was holding them up. Several violations needed to be cleared up before they got the go ahead to start. "The work should have started Aug. 3," Torres wrote in an e-mail.

I took a look at the DOB Web site. There seems to be an open complaint dated from Sept. 1. And what is it for?

FAILURE TO MAINTAIN BUILDING. MAJOR CRACKS, BULGING, AT REAR OF BLDG. FACADE. WITH SEPARATION AT BASE

Um, isn't that why they're restoring the church, to fix these things? Issuing a complaint only holds up the renovation process... 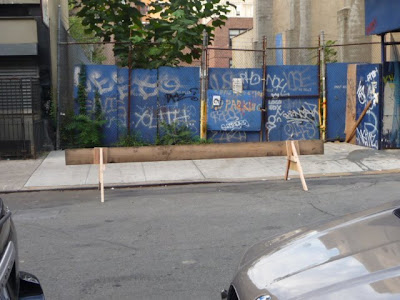 And all this is happening when St. Brigid's supporter Matt Dillon has moved back to the East Village. (Fourth item in Scoopy's column in The Villager.) COINCIDENCE? (Which explains why I've seen him so much the last few months...)

Previous St. Brigid's coverage here.
Posted by Grieve at 6:59 AM

I saw him yesterday on Ave B. I don't really care too much about spotting celebs unless I just love their work..But still..I saw FREAKING MATT DILLON!!!!

I still can't believe demo crews smashed the church windows. Is anything being done to restore those?

I love Matt Dillon in those "Bourne Identity" movies!

Heh. Actually "The Flamingo Kid" was on the TVs the other day. Always liked that.

And I was told his stay here is only temporary while the place he really lives (wherever that is) gets renovated.

why would you 'temp' here when you can be anywhere?

re: the church, i just walked by there the other night and looked at the front really closely (the steps are scary) wondering when things were going to start a-movin. good to see a little progress, even if it feels like going backward.

it is such a plain building though. i like the school on 9th much better.