Will old PS 64 get a theater for nonprofit groups? 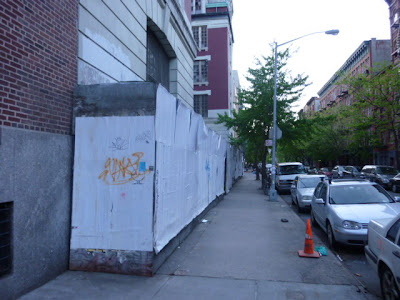 Last Thursday I noted that the sidewalk shed had been removed by workers at the old PS 64 space owned by developer Gregg Singer ... fueling plenty of speculation, mostly by me.

Anyway! The plot thickens here on East Ninth Street ... Scoopy notes the following in his column in The Villager this week..

"Michael Rosen, a Christodora House neighbor and founding member of the East Village Community Coalition, tells us there may be a new twist: A local preservationist ... recently told him that, while plans are still to make the building a dorm, now the owners also want to renovate the old school's existing basement theater and rent it out to a nonprofit theater company. And Singer is still very much involved."

And then the Scoopster let's loose:

"Clearly, Singer wants to exploit preservation-specific tax credits he can get for renovating the landmarked building — the same building he ironically defaced only a few years ago, trying to reverse its landmarking. Talk about 'theater of the absurd.'"
Posted by Grieve at 6:44 AM