Smurfs up: Mushrooms, blue creatures in store for Thursday?

Signs went up yesterday on parts of Seventh Street and Avenue A for... 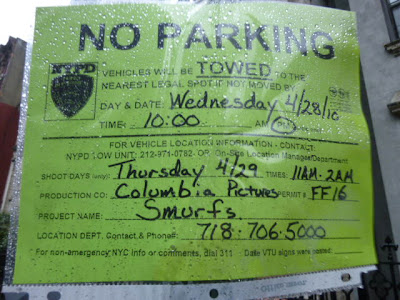 Here's the story from the official news release:

Audiences everywhere are in for a Smurfy good time as the Smurfs make their first 3D trip to the big screen. When the evil wizard Gargamel chases the tiny blue Smurfs out of their village, they tumble from their magical world and into ours -- in fact, smack dab in the middle of Central Park. Just three apples high and stuck in the Big Apple, the Smurfs must find a way to get back to their village before Gargamel tracks them down. The film is set for release August 3, 2011.

Hmm... the Smurfs must find a way back to their village before Gargamel tracks them down? I think this plot might be more interesting:

The Smurfs are mistakenly accused of killing a big time gang leader named Cyrus. Soon they have every gang in the city out to get revenge. The Smurfs must make their way from one end of New York to their turf on the other side of the city.

Seriously, though... is the East Village going to stand in for Smurf Village? Do they run into Fratty Smurf or Bachelorette Party Smurf?

What's red, white, and blue, and has stars?

Papa Smurf after falling down the stairs, drunk.
Posted by Grieve at 7:00 AM

if you choke a smurf, what color does it turn?

Ah, finally a reason to use that mushroom-fronted building on Rivington as a backdrop!

Has the EV become a Smurfdom?????
Eden you make a great slum smurf...show them some smurf style.

ev heave better be on the look-out at cooper union for blue smurf vomits. (sorry, can't get enough of this -- i think i'm done)

I read somewhere that Katy Perry is playing Smurfette. Now where did I read that? hmmm lemme think...

IN THE ARTICLE YOU ARE COMMENTING ON.