A little pink and green with your rum punch

Over at Off the Presses, Robert Simonson has more information about the new rum bar opening on Sixth Street and Avenue A...

But first, let's look at the colorful photos of the renovated space that are courtesy of Urban Daddy: 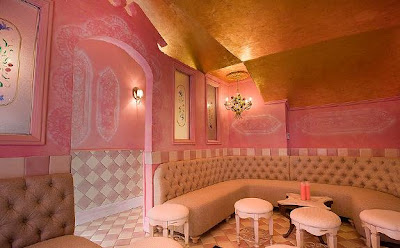 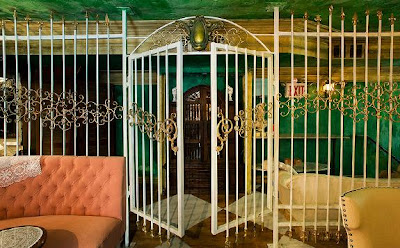 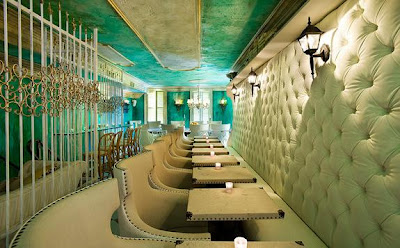 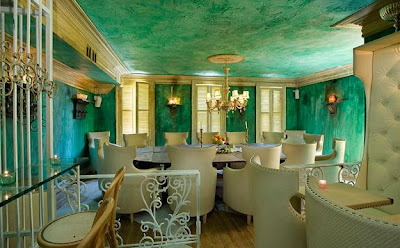 Urban Daddy, as only they can do, described the place this way:

Upon arrival, you'll find you've shifted back in time and a few degrees closer to the equator — the long room is decked in light green and antique pink, none of the chairs match, there are candle stains on the walls, and all the tables show faint reminders of drinks past.

It's a place that makes the most sense on breezy, sunny afternoons where you'll sit in front of open second-floor windows, sip exotic rum cocktails (like the El Cobre), nosh on Cuban small plates and listen to vintage Cuban tunes while making eyes with raven-haired neighborhood rum enthusiasts.

As Simonson reports, the bar, called Cocteleria!, had a soft opening last night with a Friday night official opening set. (This is all courtesy of cocktail mogul Ravi DeRossi of Death & Co.) Carteles, the Cuban sandwich shop section of the two-floor complex, opened earlier this year with a Sixth Street entrance.

The rum punch bar is open from 5 p.m. to 2 a.m. Per OTP: "All the punches can be ordered in a variety of sizes — single serving, two servings, and for large groups. You don't have to order a bowl. All the drinks start at $13, with prices go up in increments depending on the number of people who order. $100 buys punch for 'the whole family,'" as manager Miguel Calvo told OTP.

Off The Presses is here. Urban Daddy's story is here. And hat tip to Eater for the whole shebang.

Previously on EV Grieve:
More on 95 Avenue A: Private chef's lounge and a rum punch bar

Coming soon: Work starts on Cienfuegos at long-dormant (and soon-to-be-expanded) 95 Avenue A
Posted by Grieve at 6:30 AM

Jeez! This place is amazingly tacky. Makes me feel a bit woozy.

And it looks like they sunk a fortune into the space....

These rooms would look absolutely amazing with the addition of 300 white Persian cats.

Looks pretty interesting--but with $13.00 drinks and up--another place I will not go to.

Haha, Goggla, you got it.

@Goggla... There is a little something Liberace about the look here...

"none of the chairs match"

thanks for the cut-and-paste, urbandaddy!

It is garish. But I think the idea behind the decor is to capture the pastel hues of Cuba during its golden age, from Prohibition days to just before Castro. A lot of hotel were done up in these hues.

I stopped by last night to check it out (because I'm a sucker for a good cocktail, if not a crowded bar) and was told they weren't open until Friday. I said that I had heard they had had their soft opening the night before and the man I spoke to replied that they had, but weren't open to the general public until Friday.

Clearly, they're operating with a different definition of "soft opening" than me.