Does this mean the Cooper Square Hotel no longer wants to fit in with the neighborhood? 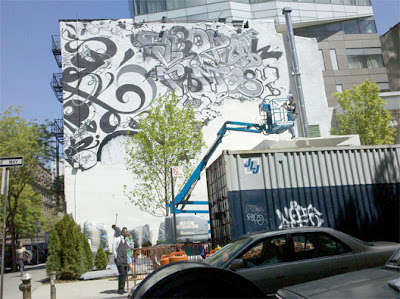 Curbed has the news that the mural on the side of the Cooper Square Hotel is being painted over right now... And they produced the above evidence...

As you may recall, the Hotel hired four graffiti artists — Joyce Pensato, Nick 1, Vizie and Shinique Smith — to create the mural.

As you also may recall:

Klus Ortleib, the hotel's managing partner, wants the place to fit in with the edgy local art scene. "When I came up with the idea, people said I was crazy," he said.

Previously on EV Grieve:
The Cooper Square Hotel's attempt to fit in with the neighborhood ready to be unveiled
Posted by Grieve at 1:57 PM

they'll probably have shepard fairey or some other deitch project artist to paint another mural in there -- you know, so that they can fit in with the edgy local art scene

But will the Coop hire security detail?

they probably already hired some of the secret service from yesterday's presidential event at cooper union. ev heave better be on the look out for them snipers.

umm, yeah, it will literally be shepard fairey. he mentioned this in a wnyc video interview that i don't have the link to at the moment... perhaps via jeremiah?

Ironically enough, this is exactly what's happening. Shepard Fairey mentioned in his WNYC interview that he was commissioned by Cooper Square Hotel to repaint: http://eastvillagefeed.com/post/539001141/wnyc-shepard-fairey-interview-at-new-deitch-projects

If you think about it having Shepard Fairey on this hotel and the wall on Bowery is really perfect like the cherry on the dessert. What better "mallpaper" could you ask for and it a corprate artworld tag no less. Clean and so sanitized. DBGB Whole Food Pulinos and Shepard..it is a Fairy tale

I really liked this mural--glad I got a good photo before it was gone!!Hope something good follows.