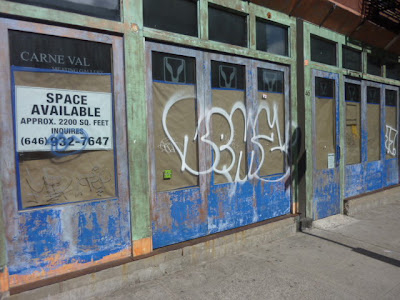 One more report from Monday's CB3/SLA meeting... Zerza, the Moroccan eatery on East Sixth Street, was looking to transfer to the former poisoned Carne Vale space at 46 Avenue B. Radouane, the owner (he sent me a note last week) stood up and gave a passionate talk on his restaurant and his love of the East Village... He introduced his mother, who is also the chef. It's a family-run business that he says has been a good neighbor throughout its seven-year history ... His current space, though, is too small and too expensive. He said he would close at 11:30 p.m. and there wouldn't be a bar... it seemed like one of the more honest and straightforward talks that I've heard ... not that everyone was paying attention on the Board. During his talk, he seemed to have the attention of three Board members. Two board members were at the far left-end of the table talking with Keith Masco, who was just before the Board. And Board member David McWater left before the Zerza presentation.

Anyway, the Board denied Zerza's request for a transfer citing oversaturation... Plus, there's still a stigma attached to 40 Avenue B ... expect the storefront to sit empty for some time...

Read the rest of my CB3 report here. Eater has more from the meeting. As does the Lo-Down.

Zerza moving to Avenue B
Posted by Grieve at 6:44 AM

Email ThisBlogThis!Share to TwitterShare to FacebookShare to Pinterest
Labels: Avenue B, CB3, restaurants

David McWater should not be on the SLA committee. If he wants to be on the board there are plenty of committees other than the on in which he has a financial interest. Shame the BP has not teeth.
Also a shame about Zerza (is this re-lining?) But with the toxic slime that the Le Souk nasties left on the space it will be difficult for a similar themed place to get in there.

The storefront you have a picture of is 46 Avenue B. 40 Avenue B is a few doors down, and was a short lived Dominican restaurant. For the last couple of days, the light have been on inside...

Owner of the building of 46 Avenue B said that the storefront is going to be a laundromat.

Years ago, when they were working on the Carne Vale space, I used the laundry next to it. I would sit out front and read while waiting for my clothes to finish. One day, one of the Le Souk guys followed a laborer out of the Carne Vale space, excoriating him about something. He yelled at him halfway down the block, then got on his cellphone. I know opening a business is hard, and I couldn't understand what he was yelling about, but I remember how little empathy he seemed to have for this guy lugging a bucket down the street.