Here's Penny-farthing on Third Avenue, not a sports bar

Over on 13th Street and Third Avenue, work continues at the former Cafe DeVille space... EV Grieve reader Margaret passed along this shot from the weekend... 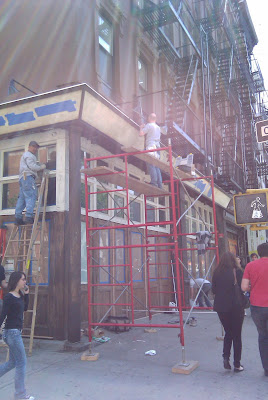 Grub Street had many more details on what will be going in here... the space, which the Phebe's folks took over, will be called Penny-farthing (a type of bicycle also known as a high wheeler). Brass Monkey designer Ben Kay is doing this space... Per Grub Street:

A year ago, it was said the space would get a sports bar, but Kay says that Penny-farthing ... will have no more than a few television sets for World Cup games and the like. Kay is giving that bi-level venue a “very industrial but comfortable atmosphere”— upstairs there’ll be a 45-foot-long bar made of “ancient-looking” wood, banquette seating, and high-top tables, as well as antique wheels, pulleys, and prints to fit the bar’s name ... Downstairs there’ll be a lounge boasting exposed stone and another bar. A full kitchen will turn out “American-English-Irish” bar food “in the same vein as Phoebe’s” (think shepherd’s pie). The owners are hoping to open in the second week of May.

I got a look myself at all this on Saturday... 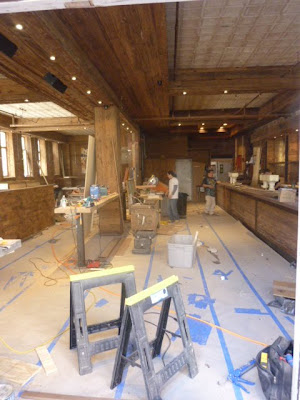 Previously on EV Grieve:
At the former Cafe DeVille, the black plastic goes up, the dead potted plants go out
Posted by Grieve at 6:49 AM