And this little piggy got painted over

Over on 192 Second Ave. at 12th Street... the scaffolding went up last week... Word is that the building will be painted... meaning the pigs are likely history... 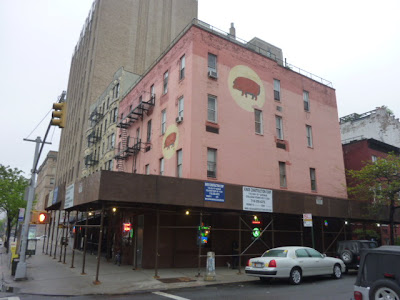 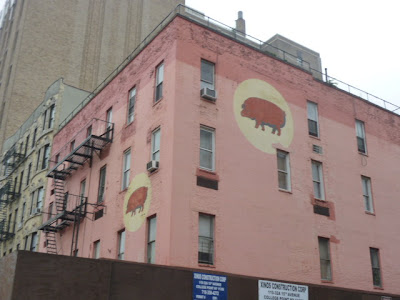 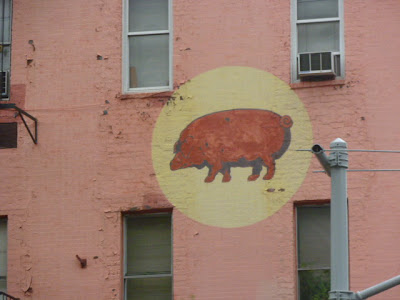 Yesterday, a crew arrived on the scene... 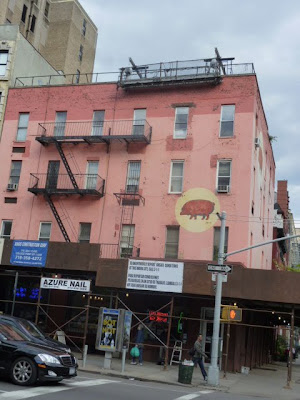 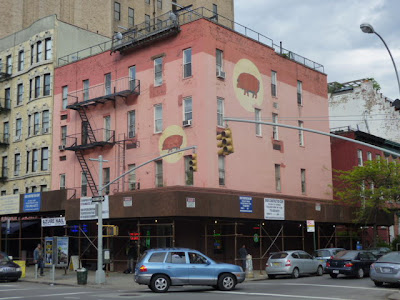 The 12th Street Ale House is on the corner now ...Dick's Bar held this corner for many years, where the pigs first came to life ...

UPDATED: Thanks to EV Grieve reader Pinhead for tracking down an article from 2000 in the Times that discusses the mysterious appearance of the pigs here...

Anyway, this is another address in the neighborhood with so much history...

Here's Leee Black Childers talking about Slugger Ann's in a scene from the documentary "Superstar in a Housedress."

WHAT? That's a damn shame.

Before it was Dick's, incidentally, in the early 90's it was a NYU haunt called The Dragon Bar. It was in there that I first heard "Smells Like Teen Spirit" (and, er, "There's No Other Way" by Blur).

Remember, though, that when much the same image was painted on the south side of the building at the northeast corner of First Street and First Avenue, the pig was considered by many as a slur -- or at least nose-thumbing -- aimed at the Jewish citizenry that had long populated the facing blocks below Houston Street.

Wasn't there a similar pig over The Levee at 1st and 1st? Is there some significance?

Wasn't there a store on First Street called Under the Pig?

...An employee at Dick's, a bar in the building's ground floor, said the landlord told him he was ''not at liberty to discuss'' either the pigs or the new paint job. Cooper Square Realty, the building's management company, also had no comment, but a representative suggested asking Jerry Atkins, an owner of 301 East 12th.

Mr. Atkins said the pig had been inspired by a picture on an old neon clock that the Fink Clothing Company distributed in the 1920's and 30's. The clock bore this slogan: ''Fink's Work Clothes, Hard as a Pig's Nose.'' The porcine mascot made its first appearance at Mr. Atkins's previous venture, a restaurant at First Avenue and First Street that closed in 1987. It was called, perhaps unsurprisingly, the Pig...

Before the Levee, I believe it was Cafe Pig, or somesuch, whose logo was the offensive-to-some pig.
Before that, the Baltyk (namesake of the Levee's Baltyk Mary cocktail) served the best soup around, keeping many a body and soul together.

I was kicked out from the ground floor a few years back when they turned my room into a massage parlor.... Damn Cooper Square Reality!!!!!