An unscientific survey! What you had to say about the B&H sign

The other day I posted photos of the new-look front at B&H on Second Avenue... I asked for your thoughts... But first! 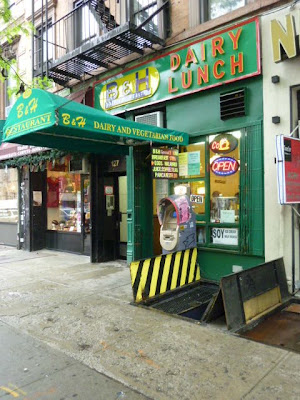 I checked in with Jim and Karla Murray, the acclaimed photographers behind "Store Front: The Disappearing Face of New York." They include this photo of B&H circa 2001 in their book: 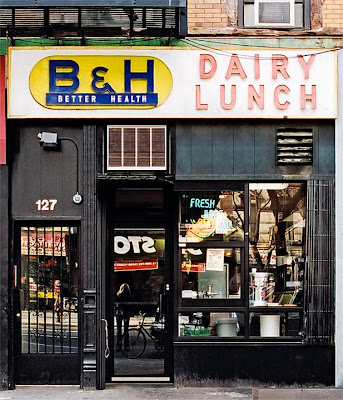 While we will always miss the old version of the sign, we have to applaud them for not going the vinyl awning route that so many stores now use. The green color of the sign and entire storefront IS very attention-grabbing. Not many stores have a green storefront! 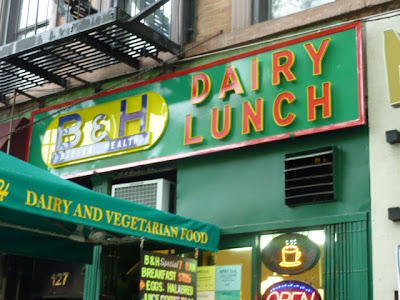 And here are your comments...

VH McKenzie said...
I'm on the love train. Could have been a disaster but it is just a freshened up version of the original.

Looks like they're going for a more streamlined appearance by sticking with the all-green (sorta) color scheme. Good for them, good for the EV.

Anonymous said...
i knooow, it's probably the best that can be done, and it is in good taste in staying w/ the original, but can i just say i miss a tiny bit the faded blue and just plain ol' letters? but everyone's right -- at least they didn't due a huge bubble sign.

Previously on EV Grieve:
B&H hangs its new sign: What do you think?
Posted by Grieve at 6:59 AM

I've gotta be the first to admit - the colors are hideous. It's like Christmas decided to hang out with Hanukkah or maybe just Kermit the Frog on LSD. The simplicity and classic style of the old design was what made that place stand out in a good way. Now it's just an eyesore.

Yeah, well I sent in a comment to the first story that wasn't positive - said I thought they were going a little overboard with the color - and you didn't post it, so you really didn't get 100% approving comments. It's TOO MUCH GREEN! Now let's see if you post this reply.

My apologies! I didn't see that comment! I would have approved it... I'm not a huge fan either... I'm glad they left the sign essentially the same, but I agree: Way too much green.

I'm hoping the weather will dull the color a bit...

OK, now I am mollified and all is forgiven! Glad we are in agreement.

Who has the old sign? Would love to have it in my living room!

Green stands out and indicates that it's a vegetarian-(ish) restaurant. I hope it increases business for them.

I'm just glad they didn't squish or distort the type, like you see with so many other awful computer generated signs.

I think the green color scheme looks appropriate kitchy and anachronistic. Though I'm not a regular customer I am heartened by the existence of B&H. Glad to call it my neighbor.