At the Navy Yard Cocktail Lounge (aka, RIP)

In his post yesterday on the documentary "New York Dive," Jeremiah linked to a Brownstoner item that the Navy Yard Cocktail Lounge on Flushing Avenue in Brooklyn had recently been shuttered and gutted.

This was news to me.

Sure enough, the Times had an item about it on Sunday:

The Navy Yard Cocktail Lounge, a dive at Flushing and Washington Avenues opposite an entrance to the Brooklyn Navy Yard, was a bastion of grit. Scantily clad dancers would gyrate for tips as patrons sipped inexpensive drinks and shot pool. But the area has become more upscale, and when the building with the bar was sold, said Steve Frankel, who owned the bar for 11 years, the lounge’s days were over. “That bar was a real-deal place, built in 1907, and now they’ve gutted it,” he said. “All that history down the drain.”

I've heard about the bar through the years — in rather mythical proportions, too. Sketchy! Dangerous! Anything goes! Quite the legend. In any event, I had never taken the time to go. Navy Yard had been on the endangered list since the building first hit the market in February 2009, as Grub Street reported.

I did make it out there a few times this year with the long-lost Intern of EV Grieve. I planned to write about it one of these days, though never got around to it seeing as it was far off the usual EVG beat. Didn't realize that the post would be an obituary.

The first thing I remember seeing walking up to the bar — just across the street. 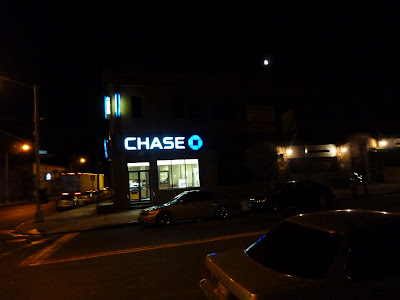 Anyway, at first glance inside the Navy Yard, the place seems like your average rundown neighborhood bar. A few regulars are milling about, playing pool. The bartender is cordial. (I'm sort of blending the different trips into one post here....it was always the same.) WBLS is on a little too loudly on the radio. The TV is also on seemingly just as loud — one of those CBS shows that I've never watched on Thursday nights. (CSINCS?)

Eventually around 10 p.m., a lot more women are suddenly in the bar... they walk in, talk with the bartender, spend a lot of time in the women's room. Soon, there are anywhere from five to 10 women va-va-va-vooming around in lingerie, bikinis, etc. Oh! They're all very outgoing, especially when there are just two of you in the bar.

Every few minutes Delicious or Cinnamon or Diamond walks up and asks again if you'd like a dance. No thanks! Two minutes later... There's not much of a chance of sitting here for, say, a few hours drinking without purchasing a $10 dance. (And they don't have change for a $20, oddly enough.) So just sit there in your stool at the bar for the lapdance and wonder why Laurence Fishburne decided to do CSINCS.

There's steady drinking. No one is smashed. It's not amateur hour. There's a no-nonsense, studied drinking going on. I always expect it to get fratastic, though that never happens these nights.

I wanted to take some photos of the dancers, though thought better of it. I think Steve is giving me funny looks down the way. I did take some more innocuous photos. 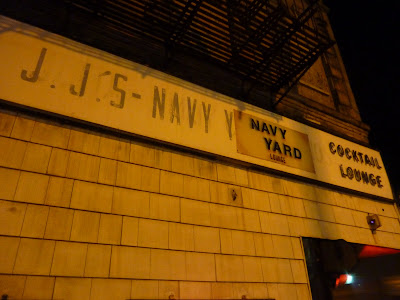 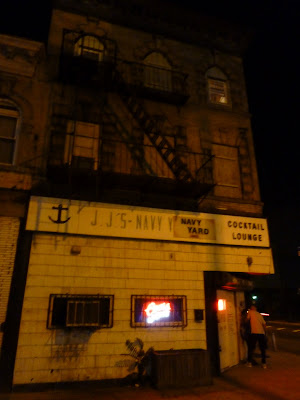 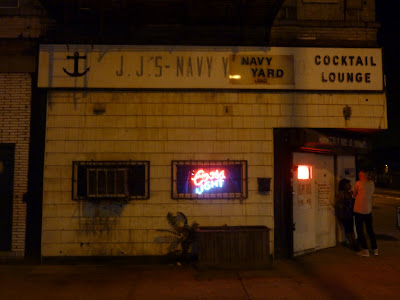 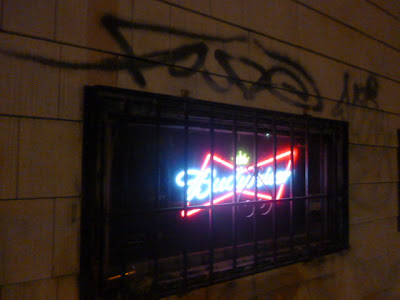 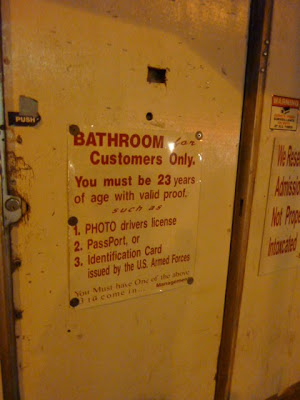 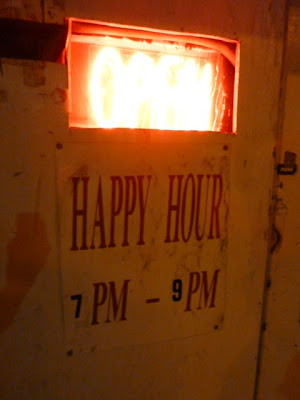 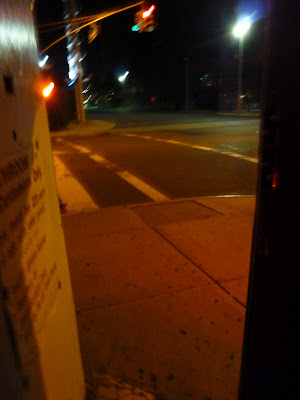 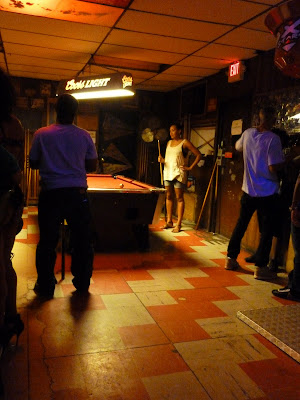 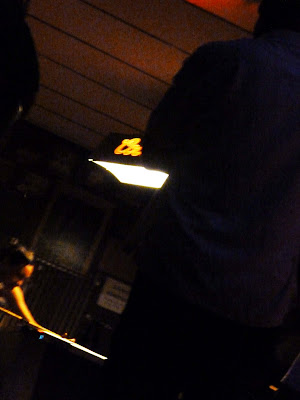 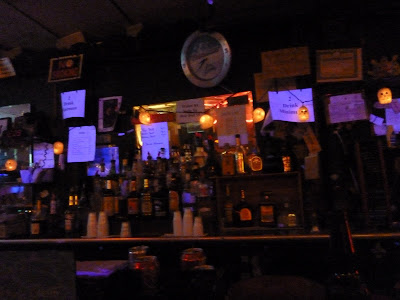 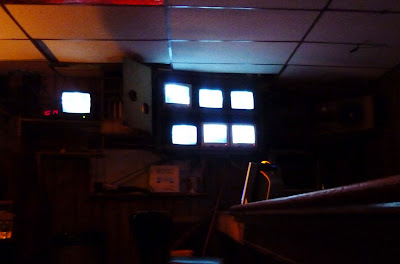 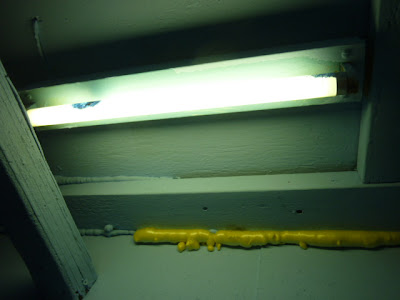 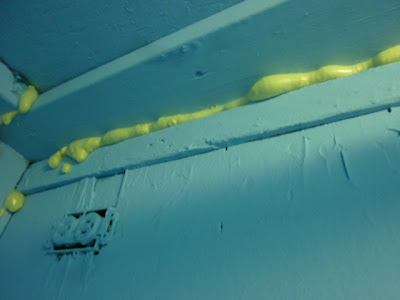 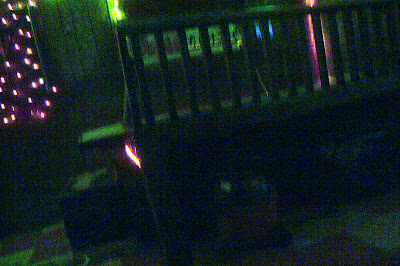 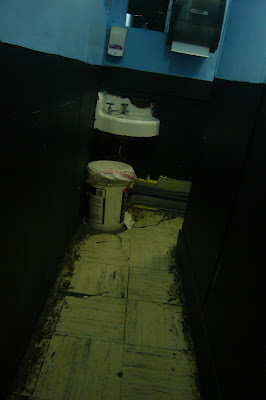 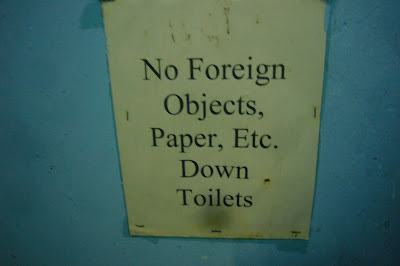 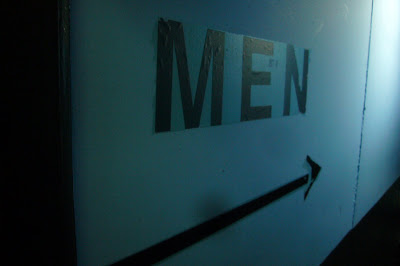 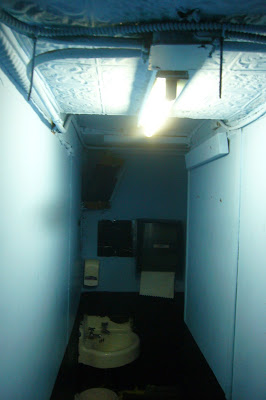 I asked the Intern of EV Grieve for his notes too:

• The drink list: Thug Passion, Incredible Hulk (which a dancer told me is "sweet")
• The old school kitchen refrigerators
• Approximately 8 security monitors
• Pool table, punching bag machine and the stage that they only use for "special occasions"
• A sign behind the bar that listed prices for top, middle and bottom shelves, literally
• The bathroom has a super-long corridor with mirror in the corner, I guess so you can see if you're about to be stabbed or raided by the cops
• There was a posted time limit on the bathroom doors. Two minutes? And I think a no-gambling sign.
• 23 and over to enter... two-drink minimum.
• The tile floor
• The wood paneling

"God that place is great," the intern said.

Incidentally, the item on the Navy Yard from the Sunday Times ran with a piece on The Fetch Club, "a haven for pampered pooches, fills a space where Fulton Fish Market smells once wafted. There is certainly no odor in this deluxe dormitory for dogs — the air is ionized and purified. The water is filtered, and the food is organic."

In the paper's Chronicle of a Changing City feature. Changing, indeed.
Posted by Grieve at 7:00 AM

so KICKING myself for never going. lovely post, G. thanks for the mammaries. (sorry)

The only time I passed this Bar was on the way to the Navy Club in the Navy Yard. It was a pretty dangerous place (not saying the bar) but the whole area back in the day. Never walked around there.

Joshua Bernstein of the New York Press just picked this as his favorite dive bar from an article last month (http://www.nypress.com/article-21757-gut-instinct-taking-a-dive.html), in retort to the one that Village Voice did on NYC's best dive bars.

nonetheless, i think imma start a pilgrimage on those dive bars that The Village Voice and The New York Press have suggested, before they start vanishing soon too. i've only been to a few of them, thus far.

In reference to that Voice piece, it's sad that someone can get away with writing a book about the best dive bars in the city when all it seems he's doing is dropping in for a drink so he can write snarky descriptions of the owners and regulars. Someone who doesn't even live in the city no less? Have some respect, buddy. As someone pointed out in the comments, the guy at the Holland Bar whose appearance he comments on has a congenital disease. Really nice. Hope the book sells well.

i especially like the picture of the hallway with the exterminator's gunk pushed into the ceiling cracks/spaces where rats can get through.
that's a caring owner.

So sorry I never made it here...must've been even better full of sailors.

I too am sorry I never was able to have a few drinks in here. I like the fact that you noted the people here are steady drinkers who can handle their booze. So much different than someone doing 5 jagerbombs to get glonked out of their gourd in seven minutes. And as far as that Village Voice piece goes, they used models on the cover instead of real bartenders. Pretty lame.

Sorry for uninformed criticism about my book, which I spent a year writing and you can find at: http://www.amazon.com/York-Citys-Best-Dive-Bars/dp/1935439197/ref=pd_sxp_f_pt

Two quick notes: The time limit for the bathrooms was five minutes, oddly enough, and an Incredible Hulk is Hypnotiq and Hennessey.

Hmm. It took a whole year to write? Maybe it is pretty good. But how much does it weigh? That's another important criteria.

I appreciate your anonymous affection, WB. Maybe we could go on a date sometime, and I could give you a copy of the book, which you clearly haven't read. I know it's hard for you to believe that someone living in Hoboken could access the city, what with the five minute Path train ride and all, but I'm nonetheless glad I've given you an opportunity to feel superior.

Some video we shot at the Navy Yard for a friend's comic book promo about two years ago... such a gloriously shady place. (But a great comic book!)

hi grieve, i'm so grateful for your post. i was always so inspired by the mere existence of this place, though sad to say I never made it in for a drink. however i was biking by when they gutted it and the property next door, and among the things he was selling on the street were the beveled mirrors from behind the bar. I bought one of them for $60. i should have bought them both! I'm glad to see from your photo of the bar with the mirror, that indeed it is the very same one - same size, with etched flowers. I've always cherished it as such, and nice to know that it actually is. I hate that so much of this nyc is vanishing. This is the nyc that i knew and loved. The nyc of today - would not draw me...

Thanks for sharing that, Andrew!

I'm glad at least one of those mirrors survived...