Scoopy has an awesome scoop in this week's issue of The Villager.... In part:

As reported by the blog EV Grieve [editor's note: Woo!], a mysterious burnt-orange Lamborghini has been turning heads in the East Village, where it seems to live. We’ve seen it slinking its way down Avenue A, like a sleek cat, emitting a sexy, powerful rumble from its engine — while hopelessly stuck in slow-moving traffic. We were surprised then last Thursday to see that the “orange Lambo” had commuted crosstown and parked right outside our office at Soho Square. .... Monday morning, and lo and behold, there it was again, parked by Soho Square .... This particular luxury sports vehicle does have one small flaw, however: Its right side-view mirror was broken off and is being held on with tape. Oh well, like they say — nobody’s perfect, not even the awesome East Village Lambo. Nelson, our building super at 145 Sixth Ave., tells us he’s noticed the car parking around the area for the past two weeks. The Lambo’s driver is a man, about age 35, who is always accompanied by a “beautiful” blonde female passenger, Nelson said. The man works nearby, he said. 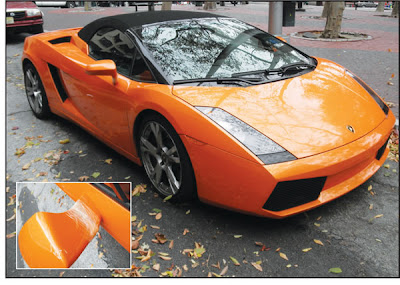 Previous EV Lambo coverage right this way.
Posted by Grieve at 6:45 AM

If you rent during the week, they throw in GPS and the blonde at no charge.

I'm confused... I thought when you rented the blonde for a week, you got the lambo and GPS for free?