The spirit of East Fifth Street

As I was saying, East Fifth Street between Avenue A and Avenue B is one of my favorite blocks around... and, aside from the masses looking for the Ace Bar on weekends, it's a lovely little street with a strong sense of community...

And this is the block in which the family of East Village-based professional photographer James Maher spent their lives... His grandparents and mother all grew up here... Thanks to James for letting me post some of his family photos from the 1930s and 1940s. (He has many more at his site, New York Photography by James Maher)

Talk about a strong sense of community. Here's a celebration of the "Fifth Street Boys" returning home from World War II.

Per James on the photos below: "I just spoke with my Aunt who tells me that the photo was taken around 1945 to celebrate the end of the war. I don't know exactly which building, but apparently my grandma and relatives had three apartments in the same building on 5th Street between Avenue A and B, which is where this photo was taken from. My grandmother and all of her sisters are most of the girls that are looking up at the camera in the second photo." 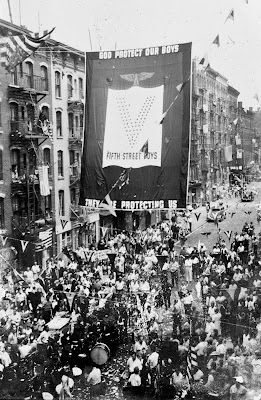 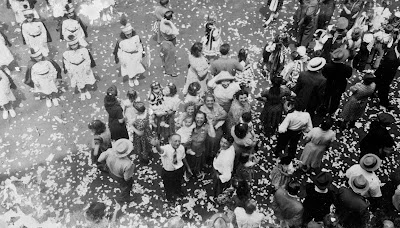 And here's a shot likely taken on East Fifth Street... on the way to an Easter Party... 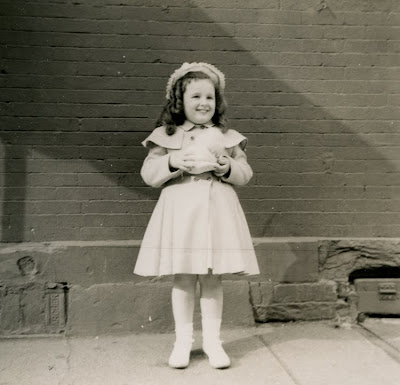 And, arguably my favorite photo... "This is taken of my Great Aunt Julia, who lived until she was 100. She was sharper at 99 than I am at this moment, and it's nice to see a younger photo that shows the same spark that everyone knew her for." This was taken on a rooftop of an East Fifth Street building... 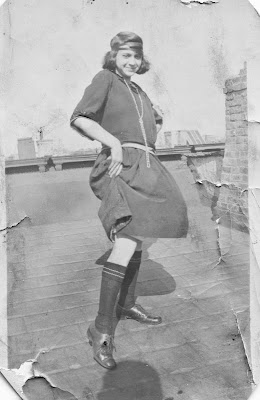 And as Mick noted in the comments, Ephemeral New York — an EVG favorite — highlighted "The East Fifth Street Boys" in a post on Sunday.
Posted by Grieve at 6:48 AM

Thanks, Mick. I missed that post. James and I have been exchanging e-mails the last few weeks.

Wow that final photo made my day! I wish I could have had the chance to know that woman. Great post :)

Great photos! And I agree with Monique, I'd trade two toes to have spent a night on the town with Julia!

Ah, this explains this victory photo from 5th St taken a block over:

Lovely photos. It's great to find someone from the area who has deep family roots and a collective memory.

wow! I lived on E. 5th from 1983 to 1984. It was like night of the living dead--there were squatters living in abandoned buildings, alot of drug traffic, and people walking around all hours of the night and day like zombies. A far cry from the photos here! I loved living there nonetheless.