What is taking over the Superdive space

The owner of the former Aces and Eights space at 34 Avenue A isn't the only person reaching out to the neighborhood.

Signs are up now at the Superdive space. The new owners of the space are on this month's CB3/SLA docket. 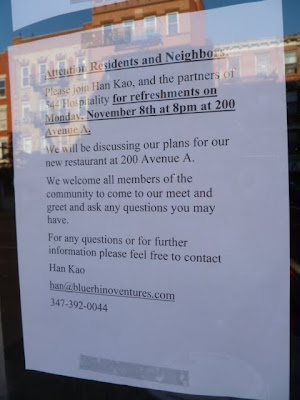 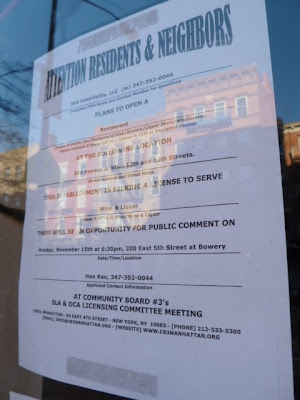 As you can see, the new owners want to meet the neighborhood tonight — with promises of cider and pastries. I sent Han Kao an e-mail Saturday morning asking for more details on what people can expect here, though he didn't respond.

However, a neighborhood power broker tells me the new owners are thinking something nouveau American cuisiney but aren't going to commit to anything until they meet with the neighborhood. The resident says while the new owners sound friendly enough, nearby neighbors would love a business that doesn't require a liquor license. One resident along Avenue A asked, "Why can't the landlord bring in a Yoga/Meditation center with a juice bar?" Noted another neighbor: "Great idea. Wrong lifetime."
Posted by Grieve at 7:00 AM

The reason why: rents are so high they would go out of business ASAP.

Just an FYI - even restaurants make the largest amount of profit on alcohol sales. It's a tough climate out there are retail. Sadly, the days of NYC having a thriving diverse, independent retail climate are quickly coming to an end.

It's sad people want to make a living off of getting other people wasted. It's so bad for your body. I would also love to see a decent restaurant in the SuperDive space. How about some really good Chinese or Thai food?

there should be rent stabilization for business to help protect retail diversity.

lets all vote on what the owner of the new place should put in and then send our decision to him.

oh wait. we have no say as we aren't putting up any cash or risk and it isn't any of our business (no pun intended).