Roger's Garden on First Avenue between First Street and Second Street closed for renovations back in early January... (uncovering a Dash Snow tag on the rolldown gate in the process) 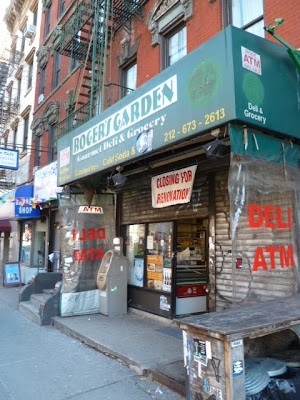 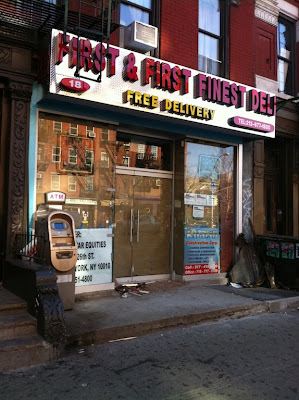 It's the latest deli to go more upscale... with a new-look that can best be described as New Americana Food Court... similar to other newish eateries-delis in the neighborhood to open in recent months... 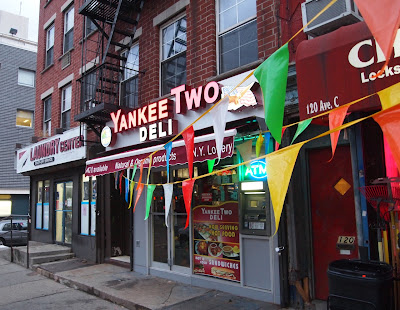 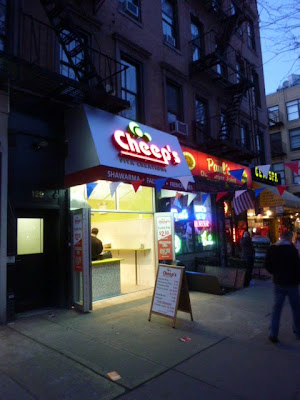 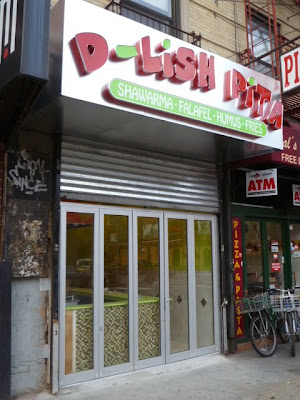 Related reading:
For Bodegas, An Uncertain Future (The Local East Village)
Posted by Grieve at 6:55 AM

Personally, I don't think the new ones are any "nicer" than the old. And they arent any less cookie cutter.

Haha, not going to get teary-eyed over this one. Roger's Garden was beyond filthy, with a good quarter-inch of dust covering most of the goods on sale.

OMG, WHAT is with these HIDEOUS signs? In what design book are they held up as exemplary? Christ!

I loved the cat at Roger's, though. Bodega cats are so dope. Food's in packages anyway and they keep out vermin.

Not sure why everyone keeps making these shiny plasticky signs, though. Kinda shitty looking.

the new signs are just ugly

seems everything new is glittery, plastic and false

Did the Dash Snow tag get painted over?

I'd like to think it did. OTOH, I'd also love to think that the de Menils paid for the Deli rehab.

I like the new signs, especially as the old awning was pretty dingy.

New owners. Roger moved to South Jersey. I heard he still owns the pet food store around the corner on 2nd Street.

I don't know about the other places, but I like CHEEP'S a lot. Their falafel is terrific. One, it includes a greater variety of vegetables, including pickled vegetables. Two, it's filled with so much stuff -- like 50% more than Mamoun's -- that it's a complete meal. And three, at $2.50, including tax (it used to be $2.00), it's a tasty and nutritious bargain that you don't see much of outside of New York's Chinatowns.

Tom - If Cheep's wasn't so effing Mall-court generic looking I would give it a chance and love to go. You guys killed me with the sign and the rush to make your little mall stand. I'd rather a Hot Chicks sign than that shit!