Earlier this week, Brooks at Lost City noted the "Est. 1886" underneath the sign for Standings, the sports bar on Seventh Street that has been there for, what, five years? He writes, "They even put up letters for 'Standings' that rather matched the font of the 'Est. 1886.' False advertising, I say, designed to snare rubes." (This formerly housed Brewsky's, a bar that likely wasn't around in 1886 either.)

I have the same feelings about Gemma at the Bowery Hotel. 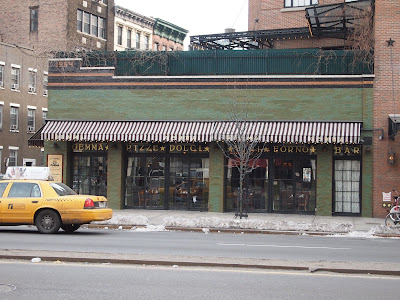 Workers started tearing down John's Garage (below) here on the corner in the fall of 2003... which is now home to the Taavo Somer-designed Italian eatery ... 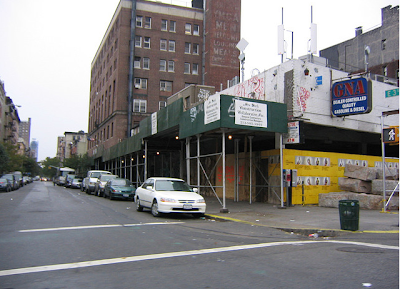 ... which is notable for introducing fine china to the sidewalks of the Bowery... 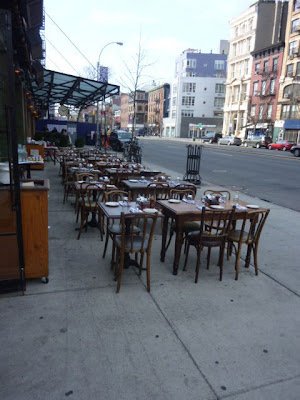 Anyway, I've never understood one thing about Gemma... up there in the corner... 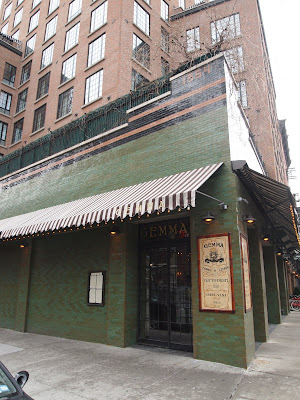 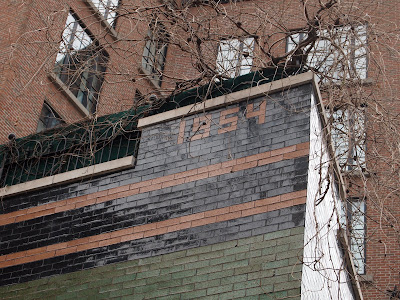 Last August, BoweryBoogie unearthed real-estate marketing materials for the Dry Dock Savings Bank, which called this corner home since the late 1870s... Dry Dock moved in the fall of 1954... 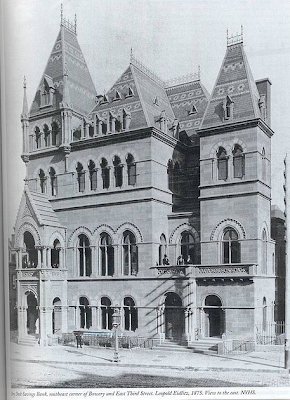 So it's possible that Gemma is paying homage to the year when the bank moved... or maybe they're just trying to give the impression to tourists that there's a lot more history behind Gemma than there really is...
Posted by Grieve at 6:58 AM

Email ThisBlogThis!Share to TwitterShare to FacebookShare to Pinterest
Labels: Gemma, the Bowery

Despite the faux advertising, Standings is still a great little spot. Gemma, on the other hand...

jesus, this is twisted on a whole new level. the theft of history.

As far as sports bars go, Standings is as good as it gets.

I think that date is supposed to be for the old garage that used to be there. If I remember correctly when the orignal developers built the building (before the Bowery Hotel people took it over and clad it in brick and casement windows) it was technically an extension of the garage and not a "new building."

So while the date on the side is totally a false, they at least have a reason for it?

That bank building is beautiful! I can't get over how buildings like that get torn down.

In other 'breaking news' much of the memorabilia inside standings hasn't always been there either. Sometimes I think people only live in NYC to find something to complain about - and an audience for the complaints.

Standings is hands down the best sports bar I've ever been to.

This happens all the time and the fiction sometimes takes and becomes "fact". Lombardi's has been telling people it is the oldest pizzeria in America since they opened. In 1994. There was a Lombardi's that opened in 1905 but that was up the street. The new Lombardi's opened 10 years after the original closed.

@Goggla - My thoughts exactly. We lose a building like that to parking and then an upscale shoebox?

@Damine - who gives a rat's ass if Standings is the best sports bar in the entire galaxy? It's just another place for dumb clucks living here temporarily on daddy's dime to get falling-down drunk and make even more obnoxious asses of themselves than they already are when sober.

Yes, the bank building was beautiful. What a shame to lose such gems.

But, although you were smart to use "started", are you sure that the garage was all torn down in the end? I know it was gutted and dug under, but I never saw it completely torn down.

I don't mean to be fact-checking, but Bowery Hotel is the only new hotel on the Bowery that I slightly like kinda -ish.

@Lisa you're so right. If nothing matters but having a reason to be mad, you'll always have a reason to be mad. I hope that works out for you. I prefer to enjoy the best neighborhood in manhattan, warts and all.

The Dry Dock Savings Bank offered its building for sale in the early 1950s. Columbia has a copy of the brochure in its digital archives. http://nyre.cul.columbia.edu/projects/view/17043

The bank was purchased by L.B. Oil Company, which replaced the building with a filling station and garage that was built in 1955 (not 1954!), designed by an engineer named Herman Kron. The garage/Gemma building appears to have been reworked and refaced with a glazed brick veneer; the choice of date is wrong in two respects: it is neither the date of the earlier garage, nor the date of the restaurant. It is likely the year the magnificent Leopold Eidlitz-designed Victorian Gothic building was demolished.

Eidlitz was born in Prague, trained in Vienna, and is considered New York's first Jewish architect. The drawings may also be at Columbia: http://www.columbia.edu/cu/lweb/archival/collections/ldpd_3460581/

Further zeroing in on the date: the NY Times reported this real estate transaction on November 9, 1954: BOWERY BUILDING CONVEYED BY BANK; Old Dry Dock Structure to Be Replaced by 'Gas' Station...
A gasoline service station is to replace the old Dry Dock Savings Bank Building at 341-343 Bowery, southeast corner of East Third Street. The four-story structure, erected in 1875, has been sold by the bank to the L. B. Oil Company, Inc." The building permit for the gas station was filed in 1955.

It's truly tragic that the original building, apparently a bank, was so beautiful and unique, and was replaced by a gasoline station and subsequently the Lego-block architecture of the Bowery Hotel. How can this be allowed to happen?

I hope there is a special circle in hell for the "L.B. Oil Company", right next to Robert Moses' cell, for destroying such beautiful architecture and replacing it with a gas station. What a disgrace.

As many said back on March 11, Standings is a great sports bar. And now it's been crowned winner of _New York Magazine_ ranking of sports bars. Standings made it to the yellow winners circle in the middle of a 2 page spread in print.