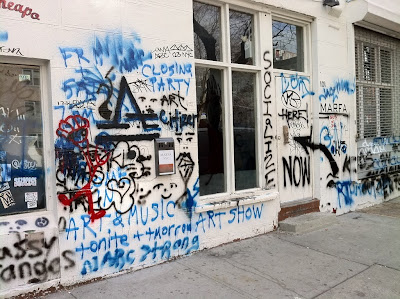 As Zagat reported, the restaurant stopped serving food in November ... though it was still open as an art-performance space. (Slum Goddess was there for a balloon art show back in October.) I asked owner Hayne Suthon for an update on the space ...

Via e-mail, Suthon said the space will now be a restaurant called Bento Burger ... with "lots of options on the burgers, probably at least 3 to 4 vegetarian, including a hemp burger, seafood, a Japanese, a Korean. A place where die hard meateaters and strict vegetarians can both call home. Cheap and fun."

Here's more from her message:

"We are making our own buns, regular, sesame, gluten free, and an asian rice bun. All square and served in bento boxes. Asian and American sides, great sauces. Drink menu is going to be based on our housemade lemonade with house infused plum, lemongrass and ginger vodkas."

She said the there will be a "Bladerunner"-inspired design by Miguel Calvo. She'll also be working with some artists and muralists on the decor.

She expects Bento Burger to be open in four to five weeks.
Posted by Grieve at 6:59 AM

Email ThisBlogThis!Share to TwitterShare to FacebookShare to Pinterest
Labels: Marfa

A Bladerunner-inspired design? So does that mean we'll be bombarded with 360 degree video and it'll be raining inside? Mmm, can't wait - especially if the waitrons are replicants!

I know can they keep the graff please?

We love the interior of Cienfuegos done by Miguel. This is gonna hopefully be as sick!

@Lisa - Hilarious! But we already have the Rainforest Cafe...