Last month, we noted that Yummy House next to Nevada Smith's on Third Avenue between 11th Street and 12th Street had closed...

Several readers pointed us to the sign that now appears in the Yummy House window... 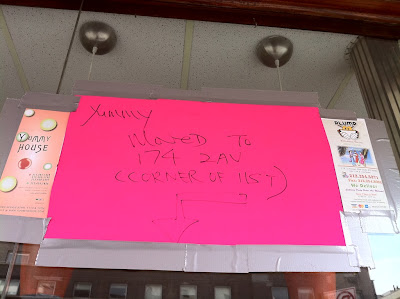 Sure enough, a pass by Plump Dumpling on Second Avenue and 11th Street reveals the dual menus... 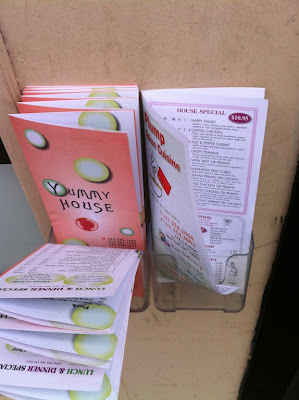 However, several EV Grieve readers have left comments about this merger.

Plump Dumpling on 11th St. & 2nd ave is now answering the delivery number for Yummy House and they said they are now sharing space and that YH has the same chef as they always did.

The food is terrible and it definitely is NOT the same as Yummy House. I'm so disappointed as we would have never ordered from Plump Dumpling. When I called back to confront them they said well we do have one chef that had worked at YH.

Anonymous said...
A sign on the building said it moved to 11th and 2nd. That location is Plump Dumpling and the guy inside insisted that Yummy House merged with them and that the cook was the same. However, the Hot and Spicy tofu -- so good at Yummy House -- was greasy and overfried ... I think maybe they somehow bought out Yummy House but there is no evidence of YH quality there. I wouldn't go again.

Anonymous said...
Went with a friend to the new location. The food is nowhere near the same quality. Everything seemed old and tasteless. I was sure i was going to get sick but didn't. Still that's my last time here. RIP Yummy House.

Thank you for bringing this to light EVG. I have been wringing my hands in quiet desperation over the situation for about a week. I had heard about the supposed merger with "Plump Dumpling", so nervously I went over there to give it a try. Picked up a General Tso's chicken and took it home. It was obvious something was up as soon as I opened up the container. Definitely not Yummy House grub. Sad.

Why can't the Yummy House just find a new lease somewhere? They are an east village stalwart. It would really sad if a thriving, essential business like this were to end over some plumbing problems.

Yeah, my family is very sad about the demise of Yummy House. I wondered when they "reopened" if they'd just sold the number. We made sure to ask and sure enough, new management, disappointing food. So, anyone know of any other reliable go-to Chinese delivery places in the nabe? We've tried dozens since Empire Szechuan changed hands, and Yummy House was the only one worth its soy sauce.

plump dumpling was never very good, when they were around the corner on 11th street.
they had a war with mr. dumpling on st. marks place and had to change their logo which looked almost the same as mr. dumpling (is that the correct name).
this is the second time that they tried to use another restaurant's good reputation,

There was a great Chinese restaurant - Rosie & Ting - on 4th Avenue and 9th Street. They left that location, but if you dialed their old number, a new place would answer and say they were Rosie & Ting's.

I think what these places do is just sell their phone number and database - you know the db that's keyed to your phone number. In that case the food was completely different, despite repeated protestations. Yummy House - which was my go to - is gone. RIP.