It just occurred to us that we haven't checked in on the Economakis Dream Mansion on East Third Street since last May... On Jan. 5, Curbed made a return visit, noting a new cornice and new windows ... Still, hasn't really seemed like much is happening... until now... Workers recently put up construction netting and a sidewalk shed... 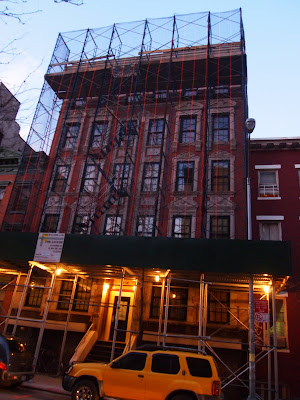 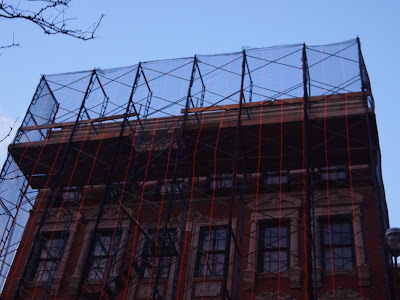 A look at the DOB permits issued a few weeks back don't reveal too much... However, there is the permit approved on Jan. 11 ... according to the DOB, workers will be installing a new curb cut. The DOB originally disapproved the curb cut, as Curbed noted on Jan. 5 ... Now it seems to be OK. As Curbed noted: "Maybe the old storefronts are being eyed for a private garage?"

Conspiracies: Where are all the fliers?
Posted by Grieve at 6:50 AM

Wtf, fuck that, why do they get a curb cut? Why would I have to pay for monthly parking (if I for whatever reason had a car), and they get a fucking curb cut because they ownt he building? No. That's public street parking!

@Anonymous - Sorry, but in the new upscale NY you can get or do anything if you have enough money. The egalitarianism that used to prevail somewhat is long gone. Anyway, it's YOUR fault that you're not a greedy billionaire!

Well, I suppose it's an SUV in this case, what with it being a family home and all.

This story has been repulsive from day one.

Douglass: That's not how shit works here, at least it's not SUPPOSED to. Being rich doesn't give anyone the god given right to usurp public space. And not for nothing, I guaran-damn-tee you he's not paying $500K in property taxes.

He pays that much for the home - not the parking spot.

They are following rules available to anyone -- had the rents on the RS apartments been closer to market value, there's no way that they would have considered doing this, as it would not have made sense.

Having said that, I think you should stop hating on them -- they've got three young children who are, in fact, innocent here.

get a job and quit whining , communist left-wing loser

I'm sorry, 10:10, but did anyone here even mention their children? And are people with children now immune to criticism? That's rich. Stop derailing the conversation.

They may be following the rules but no one here has to *like* the rules. Also, it is ridiculous to throw out the word hate/hating/haters every time people express a negative thought. It's anti-intellectual, reductive, and shuts down all discussion.

I don't even give a crap about these Economakis people -- I'm too jaded to be surprised by the crazy-ass things that superrich people do anymore -- so, as you were.

His real estate taxes will go down significantly. The building is now a 1 family, taxed at a much lower rate than a multiple dwelling.

F Economalakis and the rest of his rich elitist clan. I bet money some of these anonymous posts here are his. He is one of the biggest Yuppie scumbags ever to have infested the Lower East Side. Like I have said before Economalakis said to the fine people who he evicted " Let them eat cake" Well I say " Let him eat S--T !"

John - you cant bet money as you dont have any. Go ask the tenants that got big buyouts for some cash, unless they spent all the money eating cake.