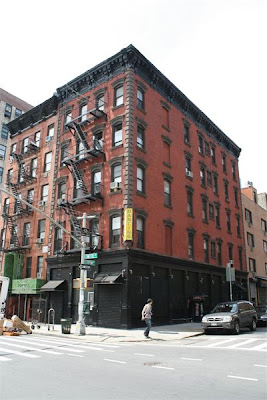 Here we are on 205 Chrystie St. at Stanton, where this five-story building is now on the market for $4.85 million. Per Massey Knakal:

5 story mixed-use building on the southwest corner of Chrystie and Stanton Streets. There is vacant commercial space on the ground floor and basement, with 13 apartment units above, of which 7 are free market and 6 are rent stabilized. This is the former home of a two story club / cabaret. The residential portion of the building is renting at an average of $35/SF. The area has recently been upzoned to a C6-3A from a C6-1, increasing the available FAR. The air rights are intact.

There's probably a lot of history in these walls... but the building is most likely known in recent times for 205, the now-shuttered hotspot that ran afoul of the State Liquor Authority in 2008.

As Daily Intel noted in November 2006: "205, the de facto after-party spot for downtown's skaters, bar owners, and artists (not to mention Serge Becker's entourage of models), is such a hipster destination that they recently turned away Keanu Reeves."
Posted by Grieve at 6:45 AM

Email ThisBlogThis!Share to TwitterShare to FacebookShare to Pinterest
Labels: Lower East Side

Increasing the available floor area ratio (FAR) allows the developer to increase the overall size of the building, right?

I ask because EV Grieve has bolded the part about air rights. All this suggests that the residents of 205 Christie St could be facing a tear down situation.

I figured the new owner would just pop a few more floors on top of the existing building.. that has been all the rage....