Still drilling at the Mystery Lot 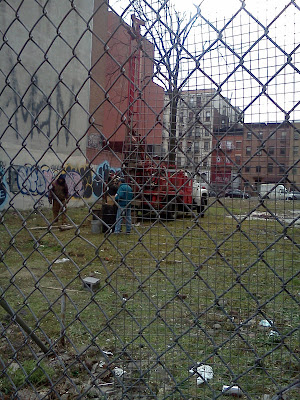 @robbyohara passes along a photo from The Mystery Lot, where work has continued all week...

In October, The Real Deal reported that developer Charles Blaichman paid $33.2 million for the site. As Curbed noted at the time, Blaichman was a partner with Jay-Z and Andre Balazs on the hotel that never happened on West 14th Street; and as a partner with Balazs on a doomed project on West 21st Street.

A commenter on our last Mystery Lot post wrote, "this is going to be a condo. it was purchased with a new jersey developer who builds condos."
Posted by Grieve at 12:34 PM

Hopefully they're not fracking.

Hhaha, I was just going to write, "Fracking?"

My guess they are taking soil samples before digging a building's foundation.

An oil derrick might actually be an improvement over condos or another 'boutique' hotel. A bunch of hookers hanging around the base of an oil well drinking wine and smoking crack would at least be interesting...