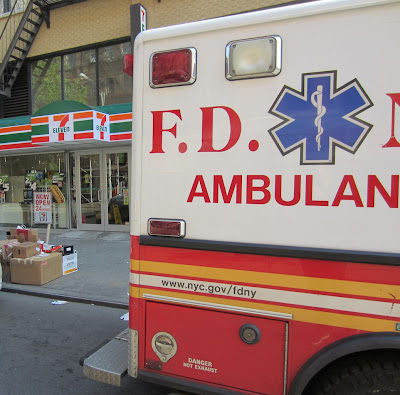 [7-Eleven on St. Mark's Place one recent day. The ambulance was only parked outside.]

New York magazine checks in with a feature on 7-Eleven(s), which features the scary headline: "The Big Gulp: How 7-Eleven plans to put the bodega out of business."

You know, 7-Eleven has this Business Conversion Program, "whose stated goal is to entice mom-and-pop shops into becoming 7-Elevens. Will bodegas be able to compete when they rarely even use scanners to keep track of inventory? When they hire extra labor just to sell sandwiches for a pittance? When they stock outdated and unpopular items like canned clam sauce and mackerels?"

Given this Business Conversion Program, "7-Eleven could plausibly claim to simply be giving moms and pops the means to take their entrepreneurialism to new heights: The 7-Eleven takeover may merely involve the same people we already buy Doritos from selling us bags of Doritos from a different supply chain. In that case, all that will really be lost are some cats and the possibility of occasionally persuading a clerk to sell a single cigarette rather than a whole pack — that, and another set of idiosyncratic storefronts, to be replaced, à la banks and pharmacies, by the nationally uniform palettes of corporate chains."

Meanwhile, we've been keeping tabs on the 7-Eleven on St. Mark's Place and the nearby Gem Spa. We worry that Gem Spa's business will be hurt by the recent arrival of the franchise across the way. 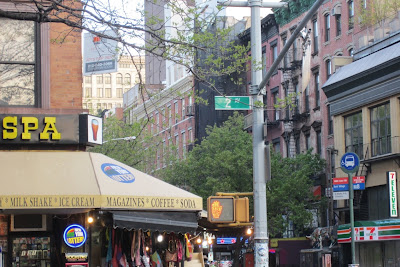 One morning, we watched a touristy couple in their 50s walk east along St. Mark's Place. They get to the side of Gem Spa and size up the various hats, sunglasses and what not that are for sale in the kiosks outside the store. They seem confused. As if they're looking for something that they can't find. The woman looks around and spots the 7-Eleven. They walk across the street and enter the 7-Eleven.

Another time. Two young men. 19? 20? 21? Figured one of the guys lived here; the other one was visiting. They stopped in front of the 7-Eleven. The visitor starts to move toward the door. His friend tugs at the other's sleeve and says — we swear! — you can never go in there. They continue walking and eventually head into Gem Spa.

What does this mean? Absolutely nothing at the moment. But we enjoyed the stakeout.

Previously on EV Grieve:
This is one reason why I hate 7-Eleven opening on St. Mark's Place
Posted by Grieve at 6:32 AM

I PUT MY MONEY BEHIND THE BODEGAS

The possibility of no more egg creams at Gem Spa?????? This means war.

it's a very clever and evil strategy. if people boycott or vandalize the 7-11, the PR drones cry, "Hey, the owner is just a regular guy, the same guy who's been selling your newspapers and candy bars for years. You're hurting him, not 7-11."

and then we're all trapped in the bullshit.

so how do we help our bodega owners NOT take the bait? how do we keep this corporation out of our neighborhoods?

it's already happening though without 7/11 being the store front
a few old tried and true bodegas have given themselves a facelift - 7th and C, 11th and C to look more approachable?
though not in the same league as 7/11 when a bodega turns over one of the money churners is to make the front more suited to the yuppie aesthetic of high gloss and steel plate
just thinking....

So many deli/markets have either closed or gone upscale in the last year or so in the East Village that I've lost track...Some of the replacements are just too bland and even more expensive with the ambiance of an airport terminal...

Like Roger's Garden on First Avenue ... Olympic on First Avenue... The East Side Gourmet Deli on B ... The market on the corner of Seventh Street and Avenue C closed and reopened as a Wholesome Foods...

The only way to keep this corporation out of our neighborhoods is very simple: Don't spend any money in there and they will go out of business.

PROTEST CHAINS IN NYC AND GIVE A BIG THUMBS DOWN WHEN YOU PASS THEM!
OUR CITY WON'T PROTECT MOM & POPS SO IT'S UP TO US!
LOVE YOUR NEIGHBORHOODS - BOYCOTT CHAINS.
ps - F*ck you, Willy Staley and NY Mag, for doing absolutely nothing in your article to attempt to preserve the city (whose very name makes your magazine lots and lots of money). your article practically lays down the welcome mat for the soul-less corporate takeover of manhattan. have you no conscious whatever???
SHEESH

to be fair, Gem Spa is not being helped by that stand of kitchsy crap on the St. Marks Side. most people don't even realize there's such a treasure within as they pass by, and aesthetically it's rather forboding to have that wall of hats, sunglasses, etc. obscuring the store.

This is really turning into a capitalistic battleground. What 7-11 is setting out to do is nothing short of a declaration of war--a war on Mom and Pop. How much more despicable can you get. The answer is none, none more despicable. However if 7-11 does win out, its the consumers fault.

Gem Spa is cool for its history and all but lets face it, its pretty ghetto. Village Farm on 2nd and 9th is where its at. Inside that little store they got a floor-to-ceiling selection that'll blow your mind. 7-11, you can get that literally anywhere in the states and beyond. Anyone with an ounce of cool or good taste doesn't set foot in a 7-11 in Manhattan. Too bad there's not enough of such ppl in the EV to make much difference. I expect this store will do just fine.

Thanks. I made it into a separate post. Let me know if you want to talk about it. grieve98@gmail.com

Agreed. It does obscure the shop. Wonder how much rent Gem Spa makes off those Kiosks... Always liked the guys working outside.

I read that NY mag article last night and could just feel the "come on you nostalgic sad hippie dinosaurs, just try to write a pathetic letter to defend your sad fusty vision of old nyc against this exciting new shiny wonderful corporate vision of uniform mechanized bliss!" sentiment ... so yeah, fuck NY mag, they know, deep down, we're right. Canned clam sauce is part of a delicious ADULT linguini con vongole, while slurpees are for the child palates of the burbs.

I have absolutely no data to back my thought that much of the money spent now in the EV is by tourists, not residents, so if residents don't go into 711, they probably wouldn't even notice.

The last time I went in was when they turned them into Quickie Marts with pink donuts and Duff Beer. I don't even think there was a 711 in the EV then... weird.

I cannot imagine myself going into a 7-11 if it were the last place left on earth. I resolve to buy even more Gem egg creams than I already do. But yeah, those kiosks are pretty tacky. And Village Farm is the best!

E.V. Grieve, no idea what the guys outside pay Gem Spa but the guy in front of Sammy's Deli next to my old shop (Rockit Scientist Records says) he pays $4,700.00 a month for his space in front which i find hard to belive (he's crazy if he's really paying that).

Get a grip! The economy is in dire straits, the greedy landlords in NY are the ones that make it economically possible for the big corporations to survive! You're all living in fanatasy land! Big corporations are moving in big time, look around you, wake up! This is compliments of the "Disneyfication" of New York, brought to you compliments of Bloomberg! You all sucummed to the brainwashing imposed upon New Yorkers from the millions he spent on his campaign! We own it now, high rents in, small business out!