Here then, where Nevada Smith's once stood

I've been wondering what has been going on behind that sidewalk shed-plywood combo where Nevada Smith's once stood at 74 Third Ave. between 11th Street and 12th Street ... 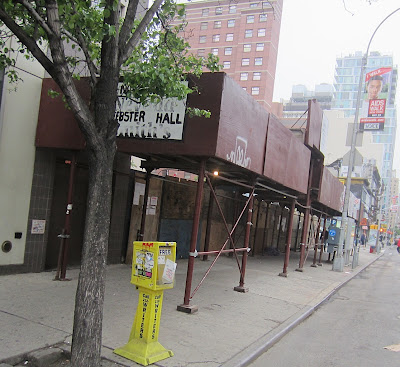 So I asked a passerby for a lift so I could dangle over the plywood with my camera.

OK then. Here we are. Just an empty lot for now. I thought workers may have already started a little excavating for this — the future. 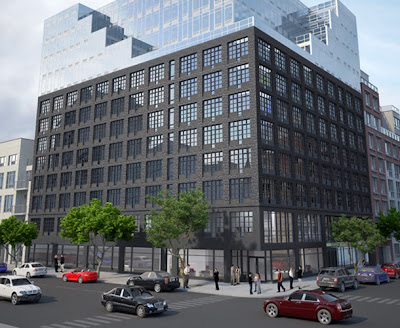 As The Deal Deal reported, the corner will one day house an 82,000-square-foot, nine-story residential building with 94 units.

The East Village will lose a parking lot and gain an apartment building
Posted by Grieve at 6:40 AM

oooof.
let me guess, they were approved to build entirely out of scale with the existing neighborhood (and in violation of current development law) by agreeing to include one-half of one studio for one and a half income restricted tenants who earn less than $160,000 a year, and will also pretend to agree to rent one quarter of one commercial space to one eighth of an institution that serves the community, but then will blatantly disregard that fake promise and instead rent to the biggest, richest, most soul-less chain store they can find and no city agency will penalize this or hold to them to their fake promises.
The entire DOB should be behind bars.

Boy that is one gorgeous building. The architect's mother must be so proud.

In last week's New York Mag there was an article with photos of celebrity apartments. Nearly every one of them coveted their antiques and retro possessions, showing that "old" things are valuable and loved. So why doesn't our architecture follow this trend?

People pay through the teeth for pre-war apartments, the kind with style, detail and warmth "the classic six"). I don't understand why developers don't want to prosper from that desire.