Tough times for Avenue B 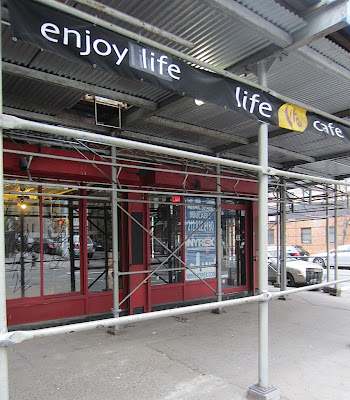 [March 25 outside the former Life Cafe]

Well, it has been a difficult few months for some longtime businesses along Avenue B. Last night, the Lakeside Lounge wrapped up its 16-year run near East 10th Street.

Let's take a look at the recent carnage:

• Life Cafe closed last Sept. 11.
• Kate's Joint closed on April 17.
• The Cabrini Center for Nursing and Rehabilitation at East Fifth Street will give way to residential usage this summer.
• Mainstay Max at 51 Avenue B will close this spring after it opens a new branch in Williamsburg, per Eater.
• The Hare Krishnas moved out of their home at 96 Avenue B last summer, as BoweryBoogie first reported.
• M&M Variety Hardware near Houston closed last fall. (One reader thought that a hardware store had been in the space since the 1950s.)

Word is that Wafels & Dinges will open its first café on the southeast corner of Second Street ... based on the same concept as the food trucks in circulation around the city. 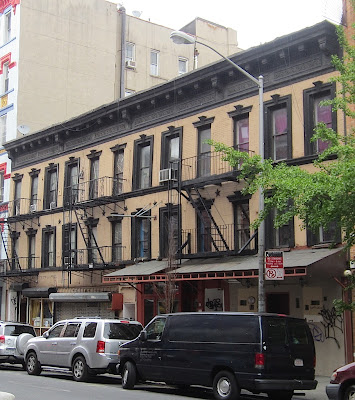 And big changes are rumored for the stretch of storefronts that once housed Le Souk. In the rumor stage at the moment. One tipster hears that a two-story addition is coming to the building. However, there aren't any permits on file with the DOB to support the rumor. (The "for lease" signs are off all the empty storefronts, though.) 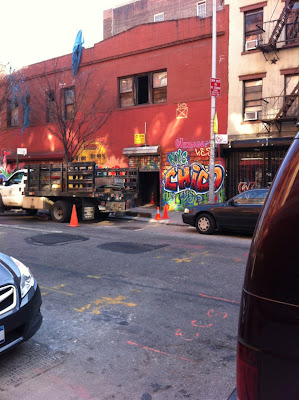 Finally, permits are still pending for the long-empty 185-193 Avenue B at East 12th Street. There is a demolition application on file already with the city (dated Sept. 20). And, according to the DOB, plans for a mixed-use seven-story building with 44 units are in the making. (You can read a short history of what's happening with the space here.)

Previously on EV Grieve:
There are more than 20 empty storefronts along Avenue B
Posted by Grieve at 6:58 AM

Email ThisBlogThis!Share to TwitterShare to FacebookShare to Pinterest
Labels: Avenue B

I really hope this hypergentrification stops..who is the big bad wolf..who is someone who would kick someone when they are down and pretend to be a friend but was really a vampire from hell.

Again and again I ask myself why is this generation's gentrifiers different from those who came before? Isn't it the same story of New York over and over? And I keep coming back to the same answer - unlike generations before who came to New York to be a part of it and reinvent it that way, this wave appears bent on destroying any remnants of old New York. Somehow their love of where they came from merged with the need to come here. It seems almost by design...

It would be great to see one of these articles for each of the avenues in Alphabet City. As a resident of just under 2 years I love hearing the history of the neighborhood, both recent and old.

I'm young and I've only been living on Avenue B for several years but I love this neighborhood and street.

And the last few months I've definitely noticed this drastic change and oncoming reorganizing of this ave. The atmosphere east of Ave A, used to be the last safehold against a constant stream of douches, NYUers and tourists in the greater EV.

I mean, they come around Friday and Saturday night. But now I'm worried that in a year's time I won't even recognize Ave B anymore because the whole atmosphere of it will have changed.

I don't want Ave B to go the way of the Bowery and I hope whoever has any influence to make it stop does so.

I am so so so upset to see the continuous demise of everything I knew and loved about Avenue B (my place of former residence before being priced out). I loved those Hare Krishnas, and Kate's Joint and those domino players between 11th and 12th...I fear for that beautiful community garden that is finally open... Avenue B seems like its slowly going the way of Avenue A and it makes me so sad. I love it for its grit and beauty. Please make it stop.

Grieve I know you need to stay anonymous but have you ever thought about doing some sort of community organizing? Tons of would be activists are drawn to your site, we need to unite and take action, find power in numbers, and channel Jane Jacobs, now more than ever before....