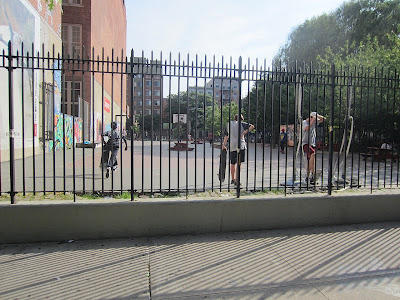 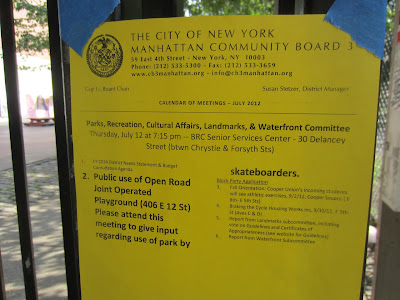 We've lost track what's been going on here... In June 2011, officials from the East Side Community High School temporarily closed the park popular with skateboarders... During a public meeting, officials cited increasing incidents of discarding trash and debris, smoking cigarettes, selling marijuana ... and trouble with people not respecting set school or other programmed activities. (This report came via EVG reader dwg, who was in attendance.)

The park closed again last December ... someone even tossed the skateboarding ramps ... the park later reopened...

Given the need for another meeting... things must not have improved this year...

The meeting is at 7:15 p.m. at BRC Senior Services Center, 30 Delancey Street (btwn Chrystie & Forsyth Streets).

Why the Open Road Park is closed
Posted by Grieve at 6:29 AM