Despite the aftermath of the Sandy ... crews arrived last week to work on the formerly empty lot on East Houston and Avenue D... 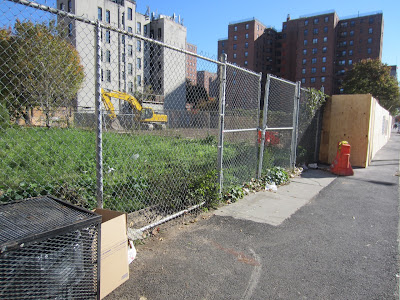 In October, the city OK'd plans to erect a 12-story mixed-used apartment building for this space. According to the DOB, the building will be 108,953 total square feet, with 9,640 set aside for retail.

Per documents, Jerry Kahen of Alphabet Plaza LLC is listed as the managing partner. Avinash K. Malhotra Architects is the architect of record. The firm's projects include the W Downtown and 2 Gold Street.

This past January, The Real Deal reported that a Queens property owner plucked down $21 million for a 130,000-square-foot development site at Avenue D and East Second Street. 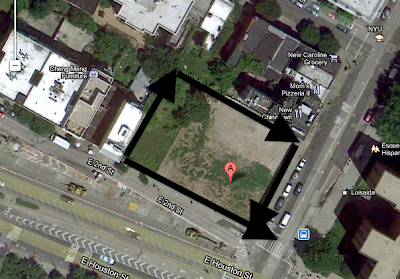 Report: 12th-story 'Alphabet Plaza' in the works for Second Street and Avenue D
Posted by Grieve at 6:50 AM

Bad karma to all involved.

By the way Arabella was broken into. The wood on the front door and the smashed inner door is not from Sandy.