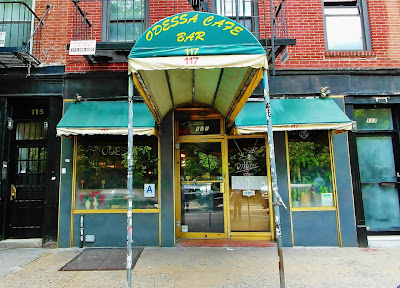 We finally have some idea about the fate of the soon-to-be-former Odessa Cafe and Bar on Avenue A. We heard last year at this time that the Odessa would likely vacate before the end of their current lease. According to city documents, 117 Avenue A was sold last summer for just north of $3 million. The LLC for the buyer shares the same address as the notorious 9300 Realty (owned by Croman Realty).

Paperwork filed ahead of the July CB3/SLA meeting shows that six principals are part of a team who is buying the business ... at least one of which is a "former owner and general manager" of Tribeca's Tiny's & the Bar Upstairs, according to public documents posted on the CB3 website. (The name of Tiny's principal and nightlife vet Matt Abramcyk does not appear on the documents.)

The application (PDF) describes that still-unnamed space as a "new American brasserie/bistro" with hours of 11 a.m. to 4 a.m. The plans show 18 tables with 54 seats as well as a bar with seven seats. 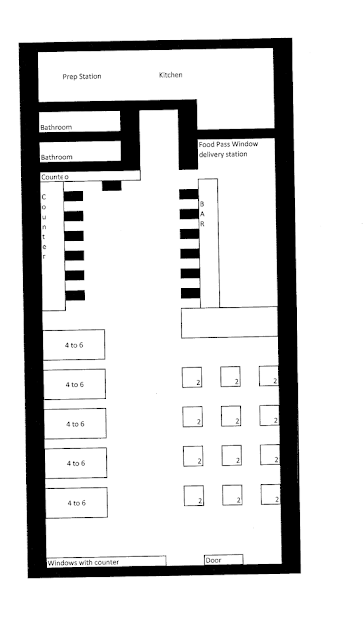 We're not too familiar with Tiny's. Here a description via the Tribeca Citizen:

The theme is rustic Americana, with antique tables, lab-style metal chairs, and mismatched plates, and the walls, ceilings, and floors are a patchwork of weathered brick, tin, tile, wood, and pink embossed wallpaper. While the menu is heavy on basics —soups, salads, sandwiches, and sides — there are sophisticated surprises, such as parsley in the beet salad and celery leaves in the sweet-potato-and-apple soup.

The pending sale of the Odessa Cafe and Bar does not impact the newer Odessa at 119 Avenue A... 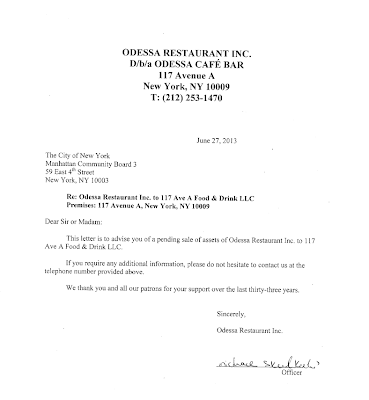 Previously on EV Grieve:
Is the end nearing for Odessa Cafe and Bar on Avenue A? 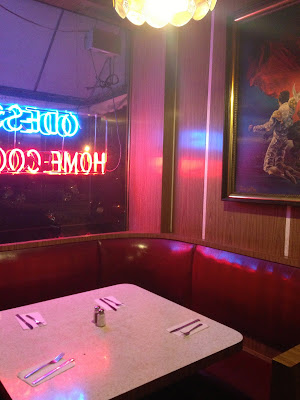 "there are sophisticated surprises, such as parsley in the beet salad and celery leaves in the sweet-potato-and-apple soup."

Yep, parsley and celery leaves sure do class a dish up!

But seriously, are they kidding? Adding parsley is now considered "sophisticated"?

oh my god!
mismatched plates, sophisticated surprises, parsley in the beet salad, celery leaves in the sweet-potato-and-apple soup?
what will they think of next?
get me some smelling salts, my brain cannot take this innovative concept.

Parsley is like bacon, in that everything you put it in becomes better.

I'm sorry, the "new" Odessa is horrible. Always has been. Too bright, too sterile, too hard-edged, none of that faded charm and individuality the old one has. Too bad we're losing the one worth keeping.

This place should be landmarked.

Odessa brought this on themselves.

All they ever had to do was, say, hire a baker to bake great crap. And have a cook to do stellar challah French Toast, and there would have been lines around the block every single morning.

They just had no idea how to run a business.

I prefer the current sophisticated surprises, such as gourds and pine cones adorning the walls, and the clock that is perpetually 11pm.

I can hear the real estate values rising. cha ching.

...it's the atmosphere that has the charm, unfortunately not the current incarnation of the cooking. I'll be sorry to see it go...a favorite spot.

Where can people go anymore for a diner in the neighborhood. Nice Guy Eddies and now this....some gato will say McDonalds or Ihop probably!! Where do people who don't have a lot of money take their kids?