Tonight: Unveiling ceremony for the 13 Portals 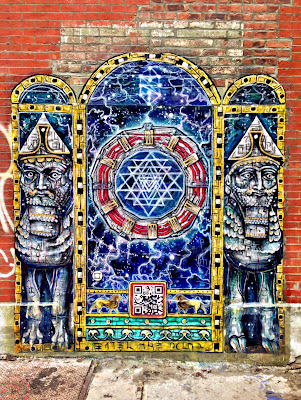 [File photo of Portal 0 on East 3rd Street via jdx]

Tonight is the official unveiling ceremony for the 13 Portals ... which are, via its website:

The project welcomes and invites open participation by all. Its objective is to “pass" through the series of 13 portals beginning by scanning a unique QR code on each piece. Once the code is scanned the participant will be prompted to answer a question, or complete a task, each with escalating difficulty or complexity. Once each task is accomplished, the subsequent portal’s location is revealed, and the participant directed to it. Each portal must be visited and cracked in order, before the participant can pass through the 13th, and final portal. Once all 13 portals have been completed, the shroud of mystery behind the works will be lifted, and the 13 portals’ esoteric secrets unlocked.

Portals 0 and 1 were revealed back in December ... Portal 0 is on East Third Street near Second Avenue while Portal 1 is on East Seventh Street and Avenue C... Every week, a new portal will be unveiled this summer...

Portal 2 will be unveiled tonight at 8:13 at a yet-to-be-announced location... Then at 9, there's an after party with bands and what not at ABC Sanctuary, 638 E. 6th St. between Avenue B and Avenue C...

Check out the Facebook event page with more info. Read more about Nicolina here.
Posted by Grieve at 1:51 PM

I walked past three people discussing this outside of 503 E. 6th Street early this afternoon, so maybe this is where is will be revealed. A woman mentioned 8:13.