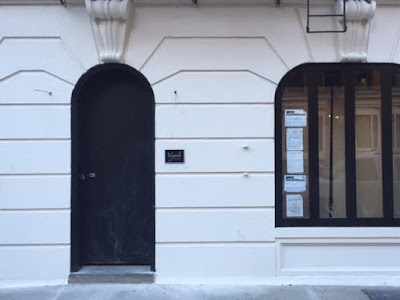 The signage has arrived at 111 E. Seventh St. for Virgola, the Greenwich Village-based oyster-and-wine cafe that's opening an outpost here between Avenue A and First Avenue... 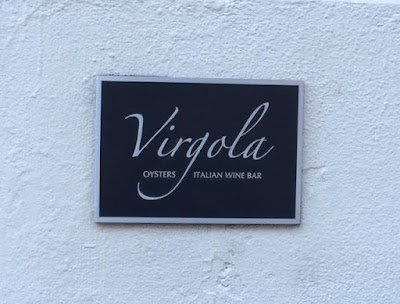 Owner Joseph Marazzo told DNAinfo in August that the East Village location will have the same vibe as the original — "with a dimly lit, black interior similar to the Greenwich Avenue bar and a new steel bar."

The previous tenant here, The Bourgeois Pig, closed after 10 years in late January, moving to a new location on MacDougal Street.

Previously on EV Grieve:
Oysters coming to the former Bourgeois Pig space on East 7th Street
Posted by Grieve at 4:14 AM

I live on 7th street and believe this is a warm welcome to our neighborhood. My main concern is this will be a breeding ground for bros, who have already taken the this entire area hostage from Thursday to Sunday. I wish this business the best and hope it is a classy, low key spot without the fraternity/sorority, entitled, I am god mentality.

I doubt the bros are after wine and oysters. They like draft beer and mozzarella sticks.

I've been to the west village outpost of Virgola. It's definitely classy. Wine and oysters, not a bro in sight. Looking forward to this new location. Can't wait for it to open. Thx for the heads up EVGrieve.

Raw oysters are very dangerous because of salmanella. Other than that we could use more oysters and wine in the neighborhood. Stinky streets for classy androids on empathy.

I remember when my friend lived in this space. I miss the old EV...but that's the point of this blog, isn't it?