[Updated] About the Stop Work Order at the incoming Taberna 97 on St. Mark's Place 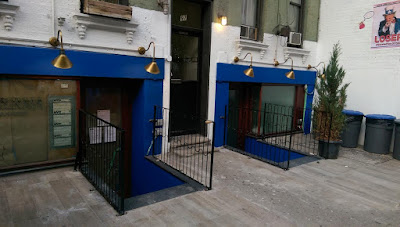 Several EVG readers pointed out the arrival of a Stop Work Order at the incoming Taverna 97, the restaurant coming to 97 St. Mark's Place between Avenue A and First Avenue (thanks to Peter D. for these photos) ... 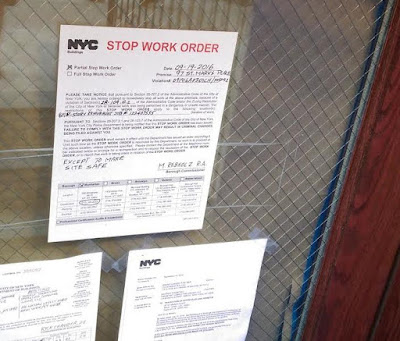 Here's what the DOB website (in their all-cap style) has to say about the Order, dated Monday:

BOROUGH COMMISIONER ORDERS ALL WORK STOPPED EXCEPT TO MAKE SITE SAFE UNDER JOB#122407555 FOR BASEMENT RESTURAUNT. ALL APPROVALS AND PERMITS HAVE BEEN REVOKED. WORK IS APPROX. 90% COMPLETED. WORKERS LEFT AT IME OF POSTING NOTICE. 1 WORKER ALLOWED TO RETURN ON 9/20/2016 TO SEAL REAR OF BUILDING.

We asked co-owner Eric Baker for an update on the situation here.

He said that the issues have been addressed and accepted by the DOB, and they are in the process of getting the permits approved.

Baker believes that some of the DOB issues may have originated from neighbors who have concerns about the back garden. The previous tenant here, Yaffa Cafe, closed, in part, because the city deemed the back patio illegal after being in use as a dining area for 31 years.

There haven't been any plans for the Taberna team to offer backyard dining here.

"Let me assure everyone involved that this has not been nor is it the case," Baker said. "Our plans for the garden involve landscaping and beautifying so it can be enjoyed from inside our space. We respect the rights of our neighbors ... [we] will always work toward as harmonious as possible a coexistence and are willing to talk with and address any issues that may come up."

Taberna 97 will serve small and shareable Portuguese dishes. They also have a beer and wine license.

Baker said that they are nearly 96 to 98 percent complete on the space.

The city has lifted the Stop Work Order, Baker reports.

Previously
Posted by Grieve at 4:28 AM

Update: Permits have been reinstated.

I wish all garden restaurant seating were illegal.