This post has nothing to do with the East Village, except for the part about 2 Boots Pizza 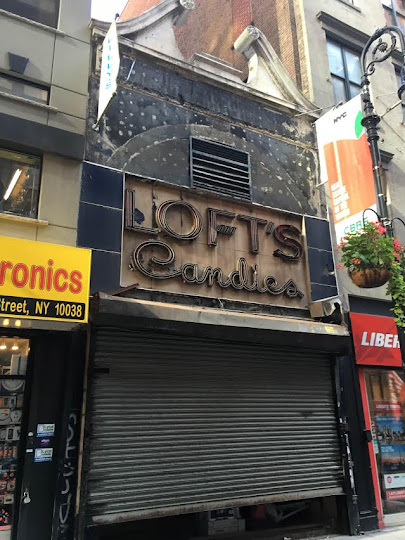 Workers recently removed the sign from a women's discount boutique on Nassau Street down in the Financial District ... revealing cool ghost neon signage for Loft's Candies... 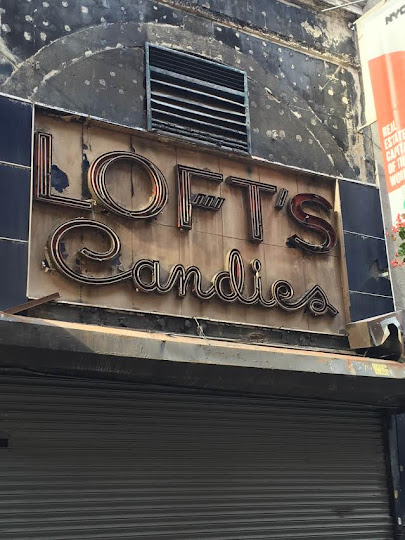 Per Wikipedia, English immigrant William Loft opened a candy store on Canal Street in 1860... at one point they were the "largest maker and seller of candy in the world in the second decade of the 20th century." In 1941, Loft merged with PepsiCo. By 1990, the last Loft's retail store had closed.

I have no idea when this location ceased operations. The storefront had been home to a Lily's Boutique in recent years. According to the Commercial Observer, Two Boots Pizza will be opening its first Lower Manhattan location here ... complete with a pizzeria and bar/lounge.

Two Boots, which got its start on Avenue A (different location than its current home) in 1987, now has 17 locations in six states.
Posted by Grieve at 4:00 AM

Wonderful! I hope and pray that the sign will be preserved.

I echo Trixie, this sign should be put into a museum somewhere. If nothing else, at lest cover it over with new signage; I still mourn the loss of the old 1930s Dapper Dan's sign on 14th Street that got uncovered and rather than be preserved, got tossed into a dumpster.

Besides the great neon, don't forget the finials at the top of the facade. Old school NYC all around.

Loft's Candies are a wonderful memory from my childhood! When I think of Loft's, I think of all those special occasions where you always brought a box of candy with you--hostess gifts, Valentines, birthdays. Brings back lots of memories. Keep the sign!

Great sign. Love it. Preserve it. But love the pizza, too.

I wonder if Let There Be Neon in TriBeCa can restore it?

Love these type of signs.

TWO BOOTS: Leave the sign! Incorporate yours into it. That is a gem.

Two Boots Pizza was located at 36B Avenue A where Native Bean is now located. I used to get pizza there every day when I was in High School. Ah memory lane.

Noticed this when I was down there a few weeks ago and couldn't believe my eyes... I hope they keep it! I like Two Boots' pizza a lot and I imagine this is the kind of thing they probably like as well. Fascinating little building, especially for this neighborhood.

Lofts. I worked at the one in Rockefeller Center while I was in college. I had to quit because I gained 25 lbs.
Love the sign though.