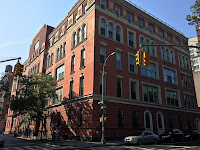 First deputy mayor Tony Shorris is testifying today at a City Council hearing about the controversial sale of Rivington House on the Lower East Side to condo developers.

As Politico New York noted, this "will mark the highest-profile public airing of the controversy surrounding the sale of Rivington House"

Back in July, Shorris answered questions during an often contentious 2.5-hour interview with an investigator working on behalf of City Comptroller Scott Stringer.

Through a Freedom of Information Law request, Politico obtained the 114-page transcript of that session.

Here's an excerpt from Politico's coverage:

It also seems clear, although Shorris never says so directly, that he did not have a particularly robust or effective mode of communicating with Stacey Cumberbatch, who was commissioner of DCAS until January of this year.

Cumberbatch informed Shorris through a routine memo about the potential sale of Rivington House, which had been a city-owned building before being sold to a nonprofit running an AIDS residence in the 1990s.

Shorris explained that he did not read the memo and that some time during the latter portion of his first year on the job, he stopped reading these memos in their entirety because they were too time-consuming.

Instead, he expected commissioners to use their judgment and inform him in person or over the phone of priorities and problems. But that evolution in communication strategy was never made clear to Cumberbatch, Shorris acknowledged during questioning.

And here's how the Post covered the July 27 Shorris meeting with investigators:

Mayor Bill de Blasio’s right-hand man claimed he couldn’t remember a meeting with Stacey Cumberbatch, a city commissioner, or the content of any conversations they had about Rivington in 2014.

When investigators tried to press Shorris over the memory lapse, his lawyer, G. Michael Bellinger, repeatedly intervened, the Post notes.

In February 2015, the Allure Group paid $28 million for the property, promising that 45 Rivington — the former Rivington Center for Nursing & Rehabilitation — would remain a health facility. In November, a city agency lifted the the deed in exchange for the Allure Group's $16 million payment to the city.

Earlier this year, Allure then reportedly sold the property for $116 million to the the Slate Property Group, a condo developer who plans to create 100 luxury residences in the building that overlooks Sara S. Roosevelt Park.

Read more about what transpired during the six-hour hearing at DNAinfo... Daily News ... The New York Times...Politico... the Post...Village Voice ...

Meanwhile! As The Lo-Down reported, the de Blasio administration plans to create affordable senior housing on the Lower East Side to make up for the loss of Rivington House. The facility will be on Pike Street.
Posted by Grieve at 6:52 AM

A lot of people in this botched process need to be arrested, prosecuted, and introduced to the hoosegow for lengthy periods of time. What a comedy, not of errors, but of disinterested stupidity and ineptitude. No wonder these clowns were put into positions of power by DeBlahBlahBlahsio - like attracts like.

Agree with Gojira but disagree that it was due to disinterest or ineptitude. There is a clear trail of evidence that establishes that the administration knew what was going on.

This is disgusting, can they reverse the sale???
There's gotta be something they can do.

This crisis arose from a combination of inept administrators and corruption. Since the recession of '08 cities have let go inspectors and employees in oversight positions to save money. And the criminal element is taking advantage of it. This is just another example of nonfeasance , malfeasance and corruption. And just the tip of the metaphorical iceberg.

A brief recap(alino): James Capalino, the renowned lobbyist to the Mayor, was playing both ends of this transaction. He was hired by Village Care, the nonprofit which owned the building, and then by Slate, the final buyer. The healthcare workers union, 1199, also a supporter of the Mayor, apparently wanted the deed restriction lifted so that there would be continuing work for its members and money for the pension fund. So far it doesn't sound like an accident. Most people would have conducted more due diligence in purchasing batteries from Amazon. How do you underestimate the value of building by $70 million? I am also wondering why more attention is not being paid to Village Care, and its overseer Emma DeVito, who must be continually seeking ways to pay her $600+K salary...

Anon 12:26 are you implying that malfeasance and corruption have taken over City Hall?

Shorris wasn't put in by De Blasio. He has been there since at least the Dinkins administration, I think.

VillageCare to Allure to Slate. VillageCare sold building for $28M. Allure paid city $16M to city to lift deed restrictions. Allure sold for $116M. Common sense says the fix was in before VillageCare sold Rivington, or why would Allure pay $28M. To run an AIDS facility? I don't think so.

Correction, De Blaz did put him in as deputy mayor but he's been in and out of city government (and the Port Authority) since the Koch era.