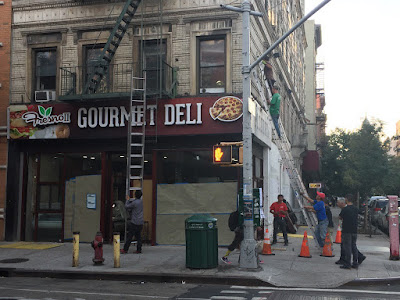 Signage went up on Saturday on the southwest corner of Avenue C and Third Street ... for Fresno II Gourmet Deli... presumably a sibling to Fresno Gourmet Deli located one building away on Avenue C.

The signage shows some sandwiches, a bagel and coffee cup... as well as a pepperoni pizza.

Pizza would make sense. The corner space was home to Majesty Pizza and Grill, which closed back in January... and previously, Lebrini's Pizzeria held forth for nearly four years.

And the growing Fresno presence is nearly up to that of the Yankee Deli Empire further north on Avenue C.

Thanks to @jason_chatfield for the photo!
Posted by Grieve at 4:00 AM

We're over-saturated in delis/bodegas here -- was hoping for something better...