The Lenin statue, safe for now on a Norfolk Street rooftop 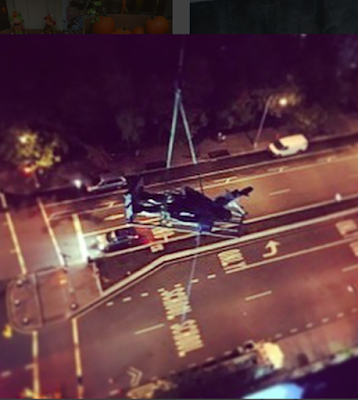 It has been a week now since workers removed the 18-foot statue of Lenin from atop Red Square on East Houston.

The New York Times yesterday reported that the statue would be on display again within about a month on a Norfolk Street building a 1/2 block from Red Square.

A construction manager who supervised the removal of the statue from Red Square on Sept. 19 said it had spent that night in a crane yard in Jamaica, Queens. The manager, Peter Marciano, arranged for it to be brought the next day to its new location atop a walk-up on Norfolk Street because he thought it would be safer there.

“I didn’t want him to be held hostage or kidnapped,” Mr. Marciano said. “Those stairs will deter all but the most severe fans of communism.”

The article is accompanied by two cool photos of the statue lying on the roof with Red Square in the background.

Previously.
Posted by Grieve at 4:16 AM