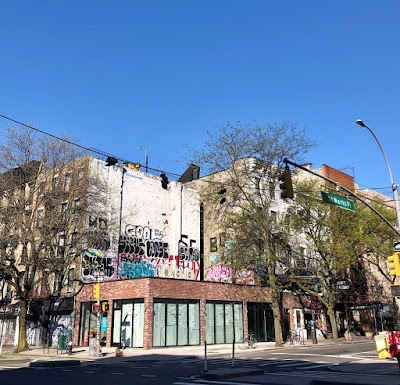 As we first reported back on March 23, Brooklyn Dumpling Shop is coming soon to 131 First Ave. (aka 82 St. Mark's Place).

In recent days, more details have been reported on how they plan on doing business in this COVID-19 era.

Owner Stratis Morfogen, the founder of Philippe Chow in Chinatown and Brooklyn Chop House in the Financial District, revised his opening plans after the pandemic shut down the city. Patrons can now expect an automat-type arrangement — not to mention temperature checks at the door.

The shop — now slated to open in July — vows zero human interaction. Instead of a server behind a counter, patrons will be greeted by an 11-foot-high wall of lockers, which will contain orders of steaming hot dumplings.

"When restaurants reopen, nobody is going to be saying, 'Do you feel like Chinese or Italian tonight?'" Morfogen said. "It will be, 'Where do you feel safest?'"

And the safety measures in place:

The front of the shop will be staffed by a single greeter wearing a face covering and gloves, of course, who will beckon customers through a device that’s able to scan body temperatures.

If a patron draws a red light instead of a green one, it could mean they have a fever — or perhaps that they were holding a cup of hot coffee. For a final verdict, the greeter leads the customer to a wall unit that takes wrist temperatures. If the second reading lands in the red zone, sorry, no dumplings, according to Morfogen.

Only two customers will be allowed into the shop at a time (versus a planned capacity of 10 for the earlier design). Once inside, customers who haven’t already ordered from their phones can visit one of two wiped-down self-ordering kiosks.


And how about ordering food then? Let's go to Eater:

[C]ustomers will be able to do so on their phone or through an ordering kiosk nestled among the nearly ceiling-high row of food dispensers. Diners won’t have to touch the pad; instead they can hover their fingers on the panel to make selection and to pay with a credit card, Morfogen says.

The stack of lockers — reminiscent of the Horn and Hardart automats that were a ubiquitous presence in NYC in the mid-20th century — flash red when an order is placed, yellow when the order is two minutes from coming out, and green when it’s ready to be picked up. Diners continue to receive text updates throughout and scan their phone on their locker when it’s ready to be picked up.

For now, you can visit the Brooklyn Dumpling Shop website for details and updates ... and a look at their 32 varieties of dumplings, which include some far-flung combos like peanut butter and jam and wonton with vanilla ice cream.

As previously noted, workers divided this former single-occupant storefront into three spaces. Eiyo Bowl, a vegan quick-serve restaurant specializing in acai and rice bowls, was the first tenant to sign a lease here.

The previous tenant, Foot Gear Plus, closed in July 2018 after nearly 40 years in business.
Posted by Grieve at 5:30 AM

Do they really expect an establishment like this with such restrictive policies for customers is going to work? It does not sound like they will even accept cash for purchases. The reasons for changes for retail businesses as a result of the pandemic are necessary but this is too much.

Sounds so enticing...Nah, I 'd rather eat at home.

"The front of the shop will be staffed by a single greeter" - of what species? Presumably not human. If it's a doggo, they've got my business.

An interesting concept. I will wait for other live humans to try it out and let me know if it's worth the trouble.

This owner sounds more suited to opening a hi tech store with every conceivable safety gadget for today's reality than serving food to real life human beings. Who would want to go through this to order some dumplings when there is plenty of nearby competition, which, I'm sure have established their own safety precautions? likely not as severe, but probably relatively safe given the big picture and far less onerous

NYU will reopen in the autumn to our despair - the pod people will line up for their cupcake dumplings served in a metal box masked experience for instagram.

Those better be some damn good dumplings.

The whole fever thing is reallyl rediculous. Anybody with a fever is home in bed or in the EU, not going out to dinner.

Haha sounds great! what a way to go out and eat- not for me- staying home and will actually save money and learn how to cook and be healthier. LOL

We have so many useless restaurants as it is- not going to miss them if some go out of business.

This sounds insane to me and I would NEVER order from a so-called "restaurant" that operates the way this one plans to.

Thank god I know how to cook.

Did you look at the menu? The dumplings sound horrible - there are flavors like Penis Butter And Jelly, or Bitter Tears And Regret.

If they're lucky, this far-fetched boondoggle will last 4-6 months, before riding off into the sunset.

And why do they need 16 lockers (based on the rendering) if they allow only two customers inside at a time?

Overly complicated, invasive and unrealistic, This will be seen as a gimmick and ultimately fail. Just be normal, "Brooklyn" dumpling shop.

this would be a lot more fun sounding if they'd go ahead and use the term automat rather than locker. Automatic for the People!

These guys are going to go out of business so fast their head is going to spin. Just do pickup for gods sake, it should only take a few seconds to order, then come back and pick up - you shouldn't even be around long enough for the virus to be transmitted in the first place. Safe = low contact, low time in a closed space with others. On top of all that opening less than a block from dumpling man smh.

Ridiculously complicated and precious. What about people like me who have no cellphone, smart or otherwise and don’t text? I wouldn’t shop there even if I could. Straits Morfogen, you’re an idiot. Way too many other places around where I can get good dumplings without all this song & dance.