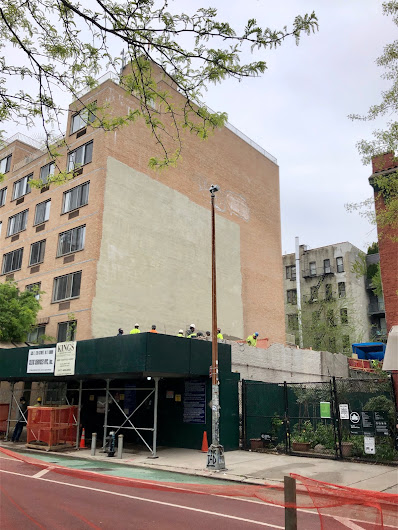 There's not much left of 535 E. 12th St., the former five-story residential building between Avenue A and Avenue B. (H/T Dave on 7th!)

As previously reported, this city-owned property, along with the one at 204 Avenue A, is being demolished to make way for affordable housing. (No. 204 is still standing.)

No. 204 between 12th Street and 13th Street will be seven stories (up from four), yielding 10 co-operative units for fixed-income housing. Meanwhile, there are 11 one-bedroom rental units planned for the all-new No. 535, which will rise to six stories.

Both buildings, part of the HPD’s Tenant Interim Lease Program, have been vacant since 2008. "Due to deteriorating structural conditions," tenants from both buildings were relocated at that time.

The former tenants of each building will be able to purchase the co-op units in the newly constructed building at No. 204, which will include ground-floor retail. Meanwhile, the all-new No. 535's one-bedroom rentals "will be a middle-income rental building with an income restriction at 130 percent AMI."

Previously on EV Grieve:
Affordable housing planned for city-owned buildings at 204 Avenue A and 535 E. 12th St.
Posted by Grieve at 5:40 AM