A Taste of the Tropics on Avenue C 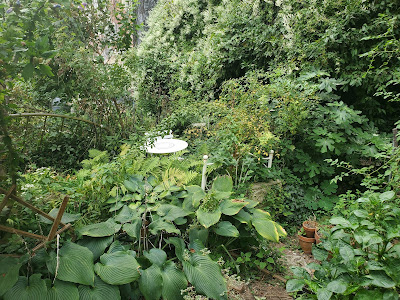 Text and photos by Kenna Beban

On the corner of Ninth Street and Avenue C, a palm-size green fruit ripens and falls onto the soft earth below, resting in the shade just feet away from a sunny East Village sidewalk.

“It’s called a pawpaw fruit,” Ross Martin, director of La Plaza Cultural Community Garden, said as he bent over to pick it up. “And it’s native!”

A cross between a mango and a banana, the pawpaw fruit isn’t what one pictures when thinking of New York City. With custardy yellow flesh and large black seeds, it has a tropical flavor more reminiscent of a Caribbean island than a vacant city lot, and yet La Plaza’s small patch of trees have happily taken root in their few feet of soil.

“I’d never seen one growing in Manhattan,” Martin said with a chuckle, “so I thought it would be cool to be the only place that had one.” 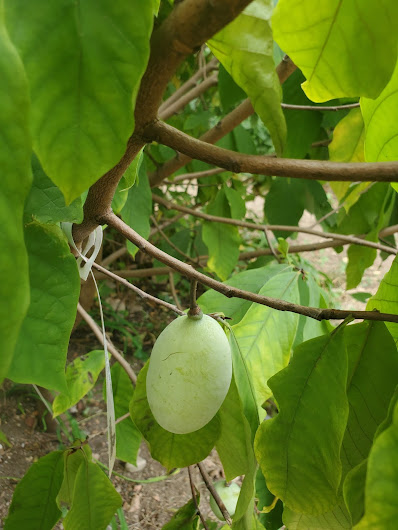 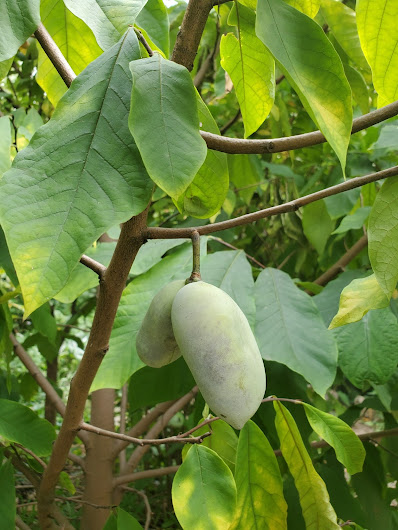 This lush community garden is one of many in the neighborhood, a local treasure with squash vines, bamboo branches and wayward weeds spilling through its wrought iron fence. The area became known for the gardens after dozens sprang from the rubble of demolished buildings just a few decades ago.

“People associate the neighborhood with gardens and gardens with the neighborhood,” Martin, who’s been with La Plaza for 25 years, said. According to him the “sort of spirit of creativity and ingenuity” that led to the gardens was “part and parcel of the neighborhood.” 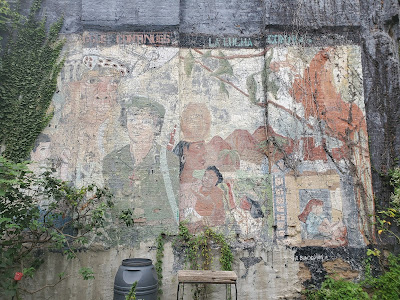 “The benefit this place has is more of a community benefit, for bringing people together, giving us a space,” Martin explained. “We can do all that plus produce food.”

With supple, velveteen skin and a delicate ripeness, pawpaw fruits feel like they might bruise if you hold them just a little too tightly. Plenty have been plucked from the trees since Martin, a landscape architect, planted the patch himself seven years ago in the wake of Hurricane Irene. The storm had knocked down a weeping willow that stood in the same place, a traumatic event for the garden’s members.

“People came to mourn the tree,” he said, describing the iconic 30-year-old giant that had once shaded the eastern portion of the land with its wispy pale branches. Only the stump remained in the storm’s aftermath.

“We used that as the base for our hugel mounds,” Martin said. Hugel mounds are a common strategy in urban gardens to protect their produce from pollutants by layering wood, mulch, and soil on top of the lead- and arsenic-contaminated lots where buildings once stood. The old willow stump serves as a base for the pawpaw patch and surrounding hazelnut trees now occupying that corner of the garden.

Hidden by wide, flat leaves, the oblong pawpaw fruits hang in clustered bunches, dropping with ease when the flesh inside turns sweet and spoonable. Picking a ripe one off the branch (which requires nothing more than a gentle twist) feels like saving it a bruising trip to the garden floor a few feet below.

“Basically anyone can come in and take anything they want,” Martin said about La Plaza Cultural. His goal is to maximize the garden’s potential as a food producer, a dream that, along with the pawpaw patch, could only take root recently.

“It wasn’t really until the storm came and knocked over the trees that we had light in the garden,” he said. “It’s a really special fruit.”

››››››››››
Kenna Beban is a journalism student at NYU and freelance writer in the East Village. She enjoys exploring the bits of New York City that bring it to life and tries to get outside as much as she can.
Posted by Grieve at 11:30 AM

great article! I grow 20lbs of organic tomatoes at 6th and B Garden most years and a boatload of Basil at Peachtree Garden! Food from LES Gardens!

How great is that !